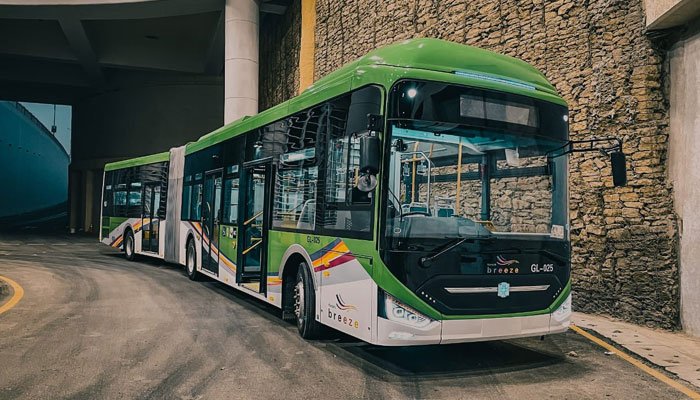 Approximately after 6 six years since groundbreaking federal funded GreenLine Bus Rapid Transit Service is ready to become operational. On Saturday all 80 Green Line Buses would shuttle between Surjani Town and Numaish Chowrangi. The tickets cost would be between Rs15 to Rs55 depending upon the distance travelled which is an affordable amount. The service surely is an amazing change for Karachities who will now have a cheap way to travel through the mega city.

This news came from official member of Pakistan Tehreek-i-Insaf (PTI) who claimed buses test drive to be smooth and effective. “Test turn of bus service appeared smooth, effective and set to start fully fledged commercial operation from Saturday” he stated.

“Its going to be operational INSHA’ALLAH as announced” said Federal Minister. Asad Umar disclosed the date for commercial operation to be December 25th, 2021.

The trial period of project started from 10 December as instructed by PM Imran Khan, with few buses going route to route to investigate any flaw or disturbance. “The project will be ready for trial operation in 10 days after which the PM will visit Karachi on its launch” Asad Umar.

“Trial period is successful and no major problem is cited”. “60 passengers can travel on seats and many can avail service by standing in two portion buses without rush situation”

Bus can travel at speed of 50 kilometers per hour, yet governments recommends for buses to continue at slow speed. About 20 stations are located throughout the route after every few kilometers.

The cost for GreenLine Bus program shot up to Rs35bn now. Executive Committee of National Economic Council (ECNEC) approved this project and its executed by Sindh Infrastructure Development Company Limited.