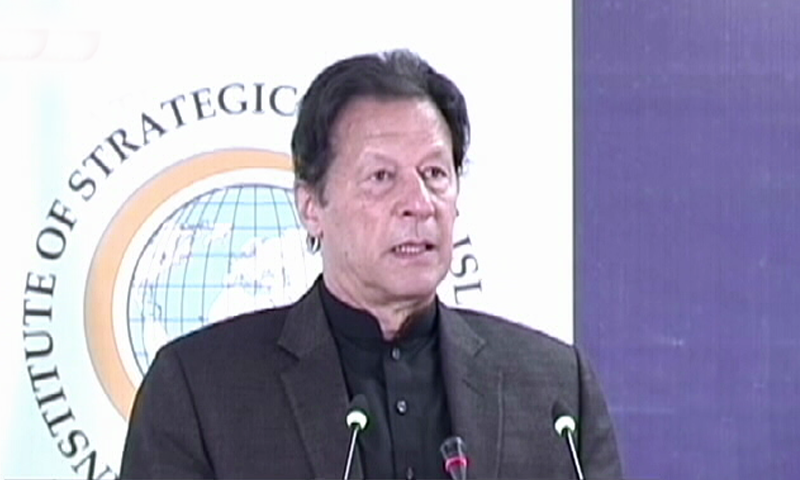 On Thursday, PM Imran Khan addressed the Islamabad Conclave 2021, which had the theme ‘A Peaceful and Prosperous South Asia’. The Prime Minister in his address said that “deteriorating US-China relations, which are heading towards a cold war-like situation. It is something Pakistan needs to stop”. “We should not be in any bloc” he added, while recalling that joining a bloc was not so beneficial for Pakistan in the last cold war.

These remarks about reducing tensions came a day after the government decided to skip the US democracy summit. The summit headed by Joe Biden will be held on 9th and 10th December. The US government in this summit, invited 4 South Asian countries including Pakistan, India, Maldives and Nepal. Russia and China were both out of the list of invitees.

The PM also mentioned that Pakistan previously had a big role in bringing Iran and Saudi Arabia together and wants to do the same with US and China. “Pakistan wants to hold talks with America and China as we did during the 1970s” he added.

Acknowledging the trade competition between the US and China, he said that the situation should not escalate to a level it did in the first cold war.

Other problems discussed in the PM’s address

With ‘A Peaceful and Prosperous South Asia ‘ being the theme of the event, PM went onto discuss more related issues. PM Imran Khan in his address discussed Afghan War and Humanitarian Crisis, Kashmir issue and climate change.

Imran Khan in his address shed light on the ongoing humanitarian crisis in Afghanistan. Describing the situation in Afghanistan, he said that it could have been much worse had a civil war broken out.

“We are trying our best to inform the world that in spite of their like or dislike for the Taliban. The primary concern should be the 40 million Afghans, and what they will have to undergo if the current situation persists”. PM Imran Khan said while shedding light on the problems Afghani people are facing due to frozen reserves.

Kashmir Issue and the Indian Government

Shedding light on the Kashmir issue, Prime Minister Imran Khan said that the issue has held South Asia as a hostage. He said that his government has “tried very hard” to sit with the Indian government, but received no response. “I slowly realized that Modi thought our efforts for peace were a sign of weakness.” he added

Discussing Indian government’s Brahmin RSS ideology he said that it sure is a misfortune for Pakistanis and Kashmiris but also the minorities in India. “Never in human history has such a large chunk of population been deemed as second-class citizens” the PM added.

Climate Change in the region

While discussing climate change, the PM said that his government is the first one to act heavily upon climate change. He put forward the “One Billion Tree Tsunami project”, which is working towards restoring 350,000 hectares of forests and degraded land.

The PM described how Pakistan was amongst the countries most vulnerable to climate change. “We knew 20 years ago that this was a threat when no one had perceived it” he said.

He said that with a situation like this India and Pakistan should work together to solve climate change. “Pakistan is trying its best to combat climate change and it has received global appreciation for it. However, regions are connected and develop together” he added.