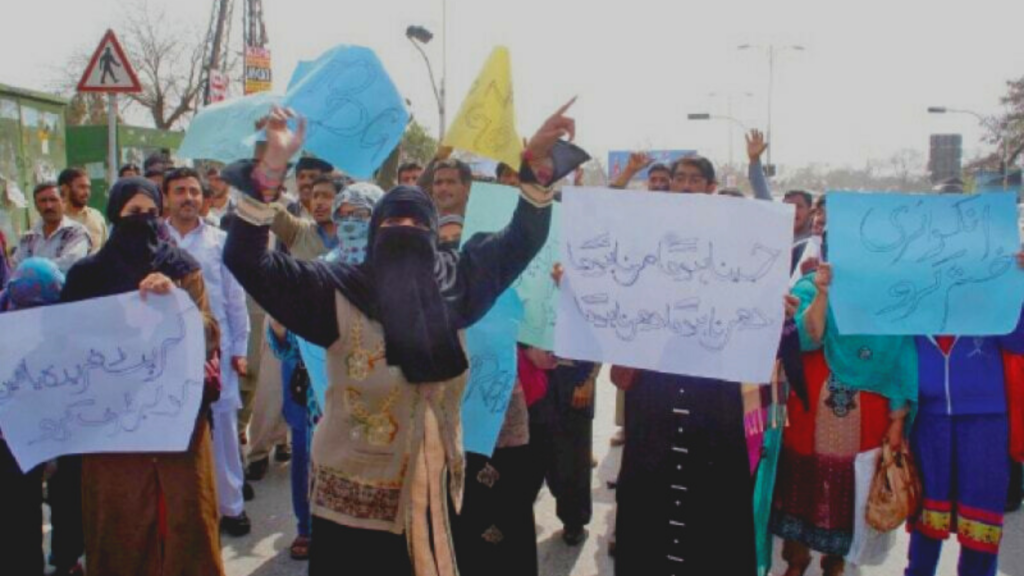 Academic activity in government educational institutions of the federal capital remained suspended. Hundreds of government teachers were marching the street outside parliament house

On Thursday, academic activities in government educational institutes of federal capital remained suspended. Teachers ranging from pre school up until masters were all marching streets outside the parliament house in an ongoing protest.

The protest are a part of strike called of by a Joint Action Force (JAF), which is a teachers representatives body. The teachers outside the parliament house are protesting against government decision to place Islamabad schools under mayor.

While the protest on a whole was a peaceful one, but clashes between teachers and police took place near D chowk. Many teachers were also seen removing barricades and barbed wires placed in their way.

Teachers in the protest shouted slogans such as ‘Ustaad ko Izzat do’. Many said that they will continue protesting until their demands are fulfilled.

FDE under mayor and Teacher’s objection over it

The FDE (Federal Directorate of Education) is a department that comes under the Ministry of Education. This department currently overlooks around 424 educational institutions including schools and colleges in Islamabad. With a recent amendment in the ordinance, FDE is now under Islamabad Metropolitan Corporation (MCI) and the mayor.

‘Malik Amir Khan’, a president of the Government Teachers Association, said that FDE should be under the ministry of education. He defended his demand by stating that “education is not administrative but a national cause”. Malik Amir added that the educational sector is not an experimental laboratory and such moves in the system would destroy it.

Political interference in the education sector

Teachers, while expressing their opposition to the decision said that the new move will decrease the quality of education. They also believed that it would increase political interference in the education system which will further worsen it.

Apart from harming the education, the new decision is also proving to be bad for teachers and employees. This is because, the employees under the ministry were ‘government employees’. Now under the Mayor, the employees have lost government benefits such as job security, pensions etc. ‘Sadaqat Abbasi’ General Secretary of the Non-Teaching Staff Association termed this as a ‘conspiracy’ against employees and said that they would oppose it at every level.