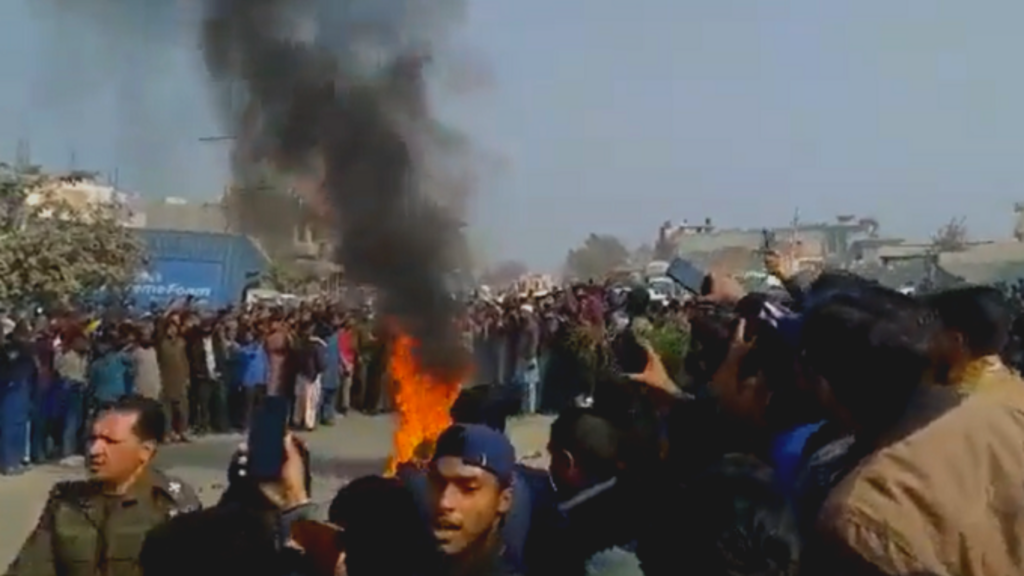 The Sri Lankan, a factory manager at a local Sialkot factory was alleged for blasphemy. The mob, over these allegations tortured the man, before burning him

On Friday, took place a horrifying mob lynching and burning of a Sri Lankan factory manager in Sialkot. The Sri Lankan, ‘Priyantha Kumara’ who was an export manager at a local factory was accused of blasphemy. The mob containing dozens of people, first attacked and tortured him and then moved onto burn his body.

Soon after the mob lynching, photos and videos started circulating on social media. Around hundreds of people were seen gathered around the Sri Lankan factory manager, chanting slogans while the torture continued.

People in the mob were soon identified and police arrested around 50 people involved in the lynching. While police and authorities have given small details about the lynching, further investigations are still going on.

PM Imran Khan, termed the lynching as a ‘horrific, vigilante’ and called this to be ‘a day of shame’ for Pakistan. In his tweet. the PM wrote that “I am overseeing the investigations and, let there be no mistake. All those responsible will be punished with the full severity of the law. Arrests are in progress”.

Joint press conference regarding the lynching

A few hours after the event, Special Representative for Religious Affairs and Interfaith Harmony ‘Hafiz Tahir Mehmood Ashrafi’ alongside ‘Punjab Chief Minister’ on Information ‘Hassan Khawar’ and IG Rao Sardar Ali Khan addressed a press conference. Mehmood Ashrafi on behalf of all ulema’s condemned the act and stated that this act has defaced Islam.

Ashrafi in the press conference said that “The elements involved in the incident have tried to damage Islamic laws and teachings”. He added that all the people involved in the mob lynching, have neither served the country nor Islam. The special representatives also said that they will go to the Sri Lankan embassy and offer their condolences.

The press conference revealed that around 50 people are under arrest, while police is trying to identify other culprits through CCTV.

Punjab IG Rao Ali Khan termed the mob lynching as ‘sensitive and unfortunate’. While giving details about the mob lynching, he said that police received news about it at 11:26am and was their by 11:46am. “We are probing the facts and also looking at the police response, whether there was any sort of delay” he added.

Details of the mob lynching

The Sri Lankan export manager ‘Priyantha Kumara’ got attacked on the Wazirabad Road, where factory workers captured him. The mob after severely torturing him, lit the body on fire. A large crowd circled around the man chanted slogans, while his body kept burning in broad day light. The remains of the Sri Lankan factory manager are undergoing autopsy.

The factory workers who started the mob lynching have accused the man of desecrating posters bearing the name of Prophet Muhammad PBUH. Police DPO Malik, however said that they are still trying to determine the exact reason behind the mob killing.