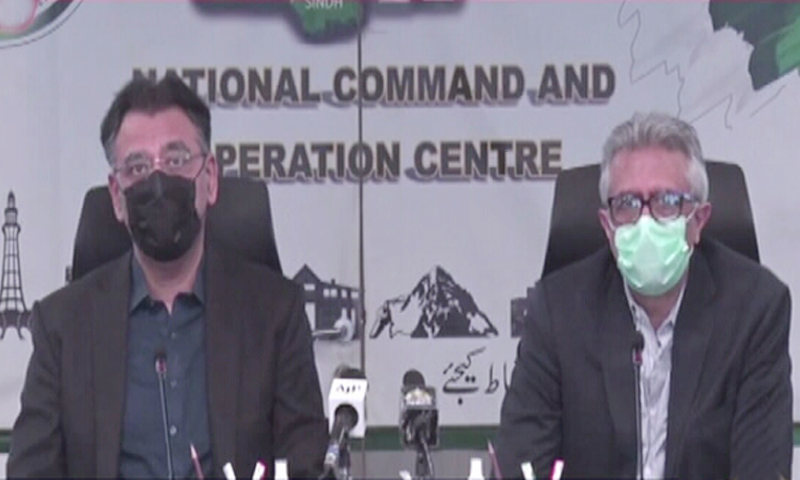 Asad Umar on Monday said that the new Omicron variant will inevitably come to Pakistan. He stressed the importance of maintaining precautions to stop a widespread, saying that we only have a few weeks

On Monday, The SAPM on Health Dr Faisal Sultan alongside Federal Planning Minister Asad Umar addressed a press conference on the new found COVID 19 Omicron variant. Both the representatives alarmed people about the Omicron variant and said that it might enter Pakistan soon.

The Prime Minister on Health Dr Faisal Sultan alongside Asad Umar stressed the need for increased precautions. Encouraging citizens to get vaccinated was also an important highlight of the address. Asad Umar while stressing the importance of vaccines said that “This [strain] has to spread in the whole world as we saw before that when a variant comes. The world is so interconnected that it is impossible to stop it. Vaccination is the most logical solution to curb the threat.”

He said that the information, he received suggests that vaccination will be effective against the Omnicron variant. “So it is my appeal to Pakistanis, particularly those who’ve gotten one dose to get the second dose. This is one effective thing we have to protect ourselves from the danger of this variant” he added.

‘A variant of concern’

SAPM Dr Faisal Sultan, while discussing the Omnicron variant said that they are treating it as a concern. He also went onto explain how this fast transmitting variant can have a devastating effect on health care. With the Omnicron virus coming in, the pressure on health care is increasing. In the worst case scenario hospitals and isolation centers might experience a shortage of beds and other equipment.

The SAPM added that genetic makeup of the Omnicron variant has shown numerous mutations. “It seems there are mutations in certain areas of the virus that have the potential of making it more dangerous or transmissible”.

Asad Umar, while discussing the precautions for the new variant said that the government has set up an even bigger vaccination campaign . This campaign will start in the next 2-3 days throughout Pakistan. Stressing the need to speed up vaccination, he said that “This variant will come to Pakistan. We have next 2-3 weeks to reduce its threat”.

Apart from this vaccination campaign, the Sindh health department have decided to inoculate all residents with a booster shot of Pfizer. These booster shots will further decrease the chances of contracting the Omicron variant.

Pakistan with increasing threats have decided to place travel ban on several South African countries. South Africa, Lesotho, Eswatini, Mozambique, Botswana and Namibia are all on the list.