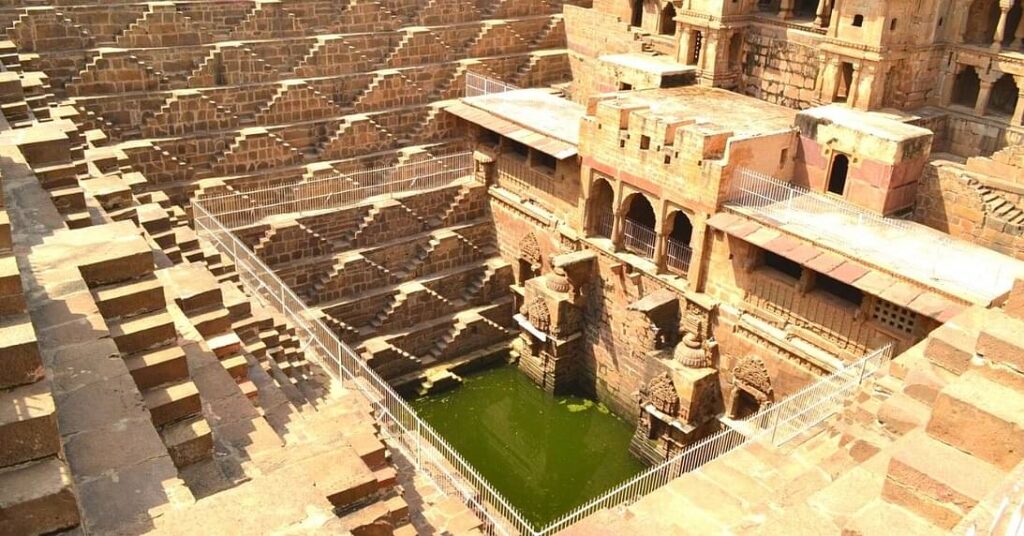 Hidden gem of Rajasthan that shows the marvelous job of ancient engineers. Featured in many movies Chand Baori is one of the unique location in India. Legends suggests the other side of story as well.

India has the oldest civilization in the history of the world. Few of its legends and stories followed allover the world religiously. When most of the world struggling for digging a hole properly, There were artisans in India who built an amazing deepest stepwell in the country. That stepwell now known as Chand Baori. Other names of baori are Bawdi or Baoli, Vav, and Pushkarni in local language, that means well. It built in 600 AD but most geologists believes that it built in 8th or 9th Century. It built to preserve water as it was massive shortage and people were suffering.

Chand baori also refers as Moon Well because the water in it shines like a moonlight. Britisher’s astonished to see 1000 years old establishment in the rural area of India. It is still not very famous spot for tourists. Its a hidden gem that explored by avid travelers only. You can find this stepwell 95 kilometers from Jodhpur, in a small village of Abhineri Rajasthan.

Details of the Vicinity

It built by King Chand of Nikumbh Dynasty. His family claims to be the descendant of Laxman, younger brother of Lord Ram. He built this well along with temple of Harshat Mata. Harshat Mata is the goddess of Happiness. King Chand built temple with well for some religious reasons. Since Rajasthan is one of the hottest place in India, so water became scarce in summers. Now they worship Durga Mata in the temple instead of Harshat Mata.

He built this well to fulfil the need of drinking, washing and bathing water. Meanwhile, Chand is 19.8 meters (65 feet) deep and enclosed by pillar verandas. It has double flights of 3,500 steps from east, west and south that take the shape of an inverted pyramid. The zigzag patterned steps run parallel to the baori rim. It is around 13 storey deep from top.  3 out of the four side have steps that lead down to the bottom of the well. These steps used to draw water from the well.

The huge mouth of the well where water collected after trickling down through the steps. It then seeps underground through the porous rocks and recharges groundwater tables. The temperature at the bottom of the well is five to six degrees lower than the regional temperature.

Like other landmarks, it has also seen so many seasons in its life. It renovated in almost each reign. Mughals builds rooms, jharokas, designed windows and gave it a shape of palace. Upper rooms now closed or general public. Britishers amazed to see that people uses same water for all purposes e.g drinking, washing, bathing etc, since they had exclusive clubs for each purpose. Now water is not for general public’s use but only as a symbol of landmark.

However, as different rulers, including the British, came in over centuries, lack of maintenance and care has resulted in the site failing to establish itself as a mainstream tourist spot.  The Archaeological Survey of India (ASI) took over the site in 1955 to look after it and bring back its former glory. Now thousands of tourists came to visit this appealing well of its time.

Like any other landmark, Chand Baori has also so many stories related to it. The most famous one is the whole building built in one day. By observing the whole place, this claim is impossible to believe but folk says that ghosts built this design. According to Another legend no tourist can reach back to exact point where he started. Looking at the design it is possible, people can get confuse in maze really easily. But old stories suggests that spirits misguide the tourists on their way.

Last but not the least fact told by my tourists. Many tourists observes the black shadow following them the minute they enter the baori. When they try to follow the shadow, it disappeared or changes the location. few tourists hears echoes of their names from the water. But these are myths or truth, you can go and decide for yourself.

Chand baori appeared in many movies. Due to its eccentric design, location serves the most scenic beauty on the cinema screen. It appeared in Paheli (2005), Bhool Bhulaiyya (2007), The fall, Bhoomi, etc. Batman movie The Dark Knight Rises also took an inspiration from this baori. One location of the movie inspired by it, whereas movie does not shoot in the exact location.