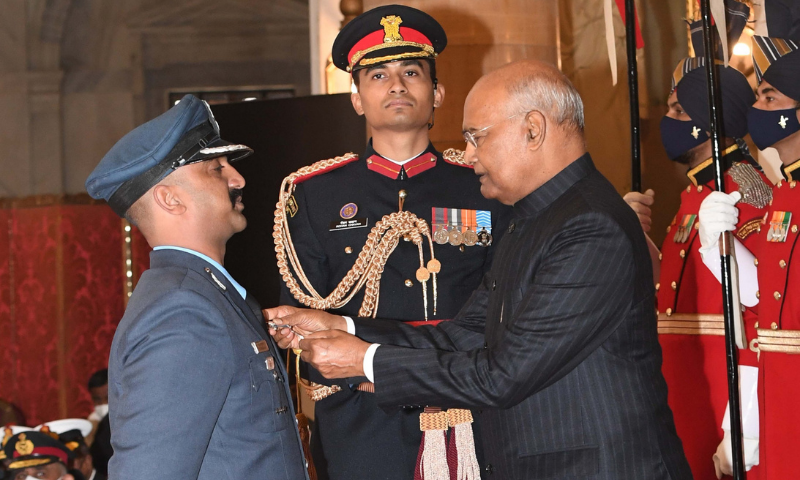 This ceremony has taken place a few days after Abhinandan had a promotion and became a group captain. According to reports, Abhinandan received the award for shooting down a Pakistani F-16 aircraft in February 2019. The pilot according to India, showed conspicuous courage and shot Pakistani aircraft during an Indian airstrike in 2019.

This news of shooting down an F-16 however, is nothing more than a mere baseless claim by India. Both independent observers and the Indian Media have rubbished these claims made by India.

IAF pilot Abhinandan was arrested by Pakistan army officials on Feb 27, 2019. This happened after Abhinandan’s plane was shot down after violating Pakistan airspace. With his plane shot down Abhinandan ejected somewhere near Azad Kashmir. Upon reaching ground, the pilot was captured by locals, who tried to beat him. Officials from the Pakistan Army, however rescued him from the Angry crowd.

Despite the pilot’s violation and bad intentions, Pakistan army treated him with respect. Pakistan army then gave Abhinandan medical care and shelter. A video released by ISPR shows Abhinandan conversing with Pak Army officials. During the video statement Abhinandan said, “I’d like to put this on record; I will not change my statement even when I go back to my country. The officers of the Pakistan Army have looked after me very well”.

Just a day after his arrest, Pakistan Army released Abhinandan at the Wagah border as a symbol of peace.