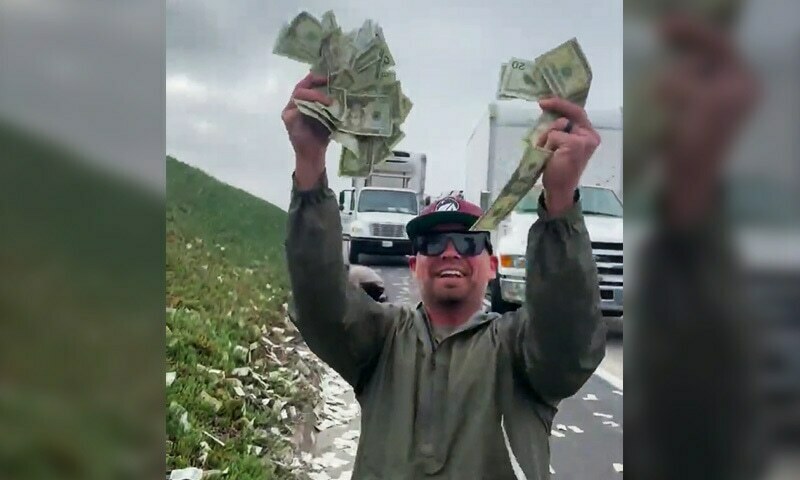 Free Money on The Freeway! said people, as an armored truck carrying bank notes, accidentally spilled cash on California freeway. Chaos erupted as passengers stepped out of their vehicles and collected bank notes

Recently a cash truck going across a freeway in Carlsbad, California accidentally spilled out a large amount of cash. This cash spill caused havoc on the freeway. Cars stopped and drivers stepped out and started collecting spilled bank notes. This caused a major traffic jam on the freeway. People started to scoop up big amounts of cash and drive away with this.

At around 9:15, Friday, California Highway Patrol (CHP) received complaints of scattered cash on the Interstate 5 near Cannon Road. Soon police arrived and got the situation under control. Two people are arested trying to scoop up the cash.

After a detailed investigation, both CHP and FBI organized a joint press conference. “Many of the motorists returned the money immediately to the officers; However, there were motorists who observed driving from the scene with stolen money”. “The CHP would like to thank those motorists who have already returned money to their local CHP office and remind the public to do the right thing and return any money they found on the freeway”.

“There’s a lot of video evidence of people stealing the cash from the freeway, picking it up” warmed CHP officials. The officials have stated that any person that picked up the money has to return it in 24 hours. Failure to return the money would result in a police charge against them.

Money in the armored truck actually belongs to a bank. And it was being carried to a different place. The thousands of dollars in the van started to slip out because the truck’s backdoor accidentally opened up.