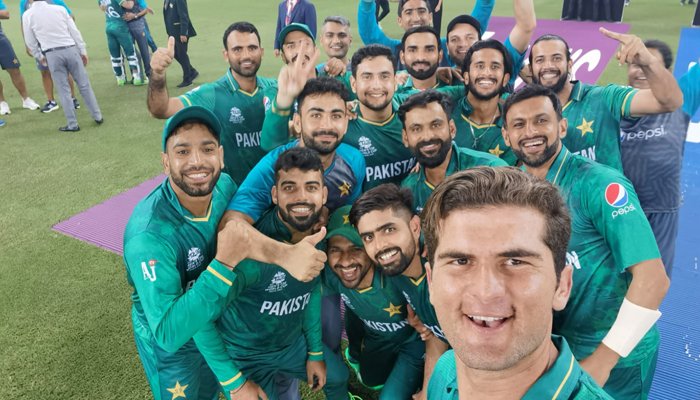 With an excellent performance in the T20 World Cup, Team Pakistan won many hearts, what it broke however was records!

Throughout the 2021 T20 World Cup, Pakistan under the captaincy of Babar Azam delivered an excellent performance. Players from both the batting and bowling side performed exceptionally well. Players including Muhammad Rizwan, Babar Azam, Shoaib Malik broke many T20 batting records.

While Pakistan failed to win against Australia in the semi finals, they won all five matches in the group stages. Their exceptional performance in the group stages won many hearts and broke many records. Listed down below is a list of records team Pakistan broke at the 2021 T20 World Cup.

This curse of not winning a T20 World Cup match against India, however was broken off this year. Pakistan in this T20 World Cup got a humiliating victory over India. Pakistan delivering an unexpected performance won the match by 10 wickets.

This record once again was one broken in the Pakistan vs India World T20 match. Pakistan in this match against India had the highest opening partnership in the history of T20 World Cup. The credit for this record goes to opening partners Babar Azam and Muhammad Rizwan who made 152 runs together.

Their partnership of 152 is the highest in T20 World Cup’s history. Before Babar Azam and Muhammad Rizwan, no other opening partners have crossed 150 runs.

Opener Muhammad Rizwan performed consistently throughout the whole tournament. The player since the start of the tournament was the backbone of Pakistan’s batting side. Rizwan during the tournament completed his 1000 T20 runs. Rizwan however completed these 1000 runs with an average of 50.2 which was the highest in the history of T20 cricket.

5. Asian Team with most wins against New Zealand

Pakistan had a splendid 5 wickets victory against New Zealand in the group stages. With this victory Pakistan became the only Asian team to win 3 T20 world cup matches against New Zealand. Other teams from Asia including Sri Lanka and India have defeated New Zealand, 2 and 0 times respectively.