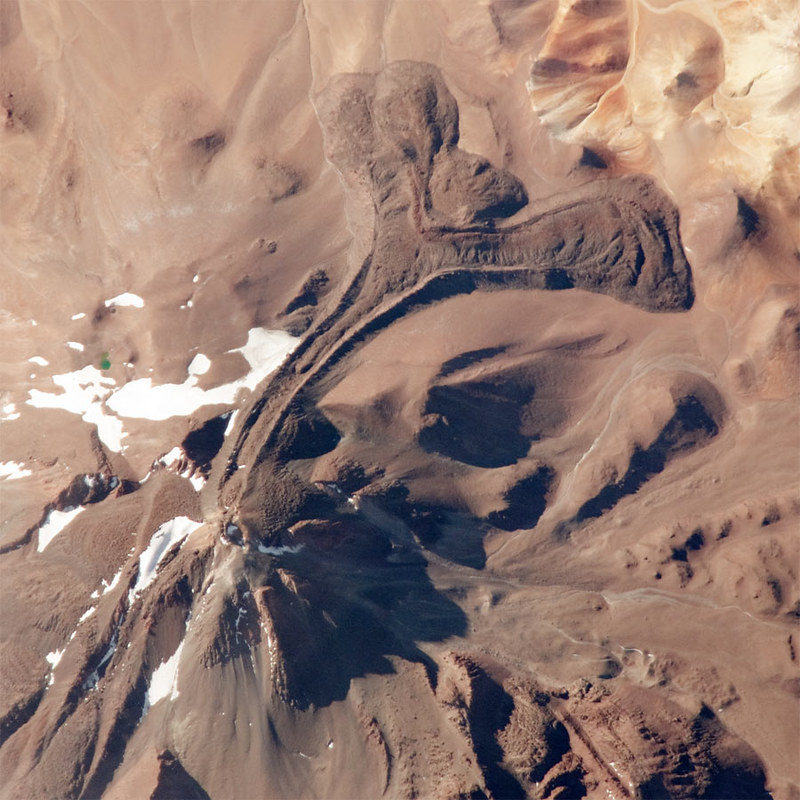 A volcano is a vent through which molten rock and gas escape from a magma chamber and they can differ in height, shape, and slope steepness. Some mighty volcanoes are tall cones and others are just cracks in the ground. As you might expect, the shape of a volcano is related to the composition of its magma.

‘Nevados Ojos del Salado’ is the world’s highest active volcano among the list of active and mighty volcanoes. It is situated on the border between Chile and Argentina. It’s about 20 kilometers south of Paso de San Francisco, where the route crosses the international border. The mountain is extremely dry, with snow only surviving on the summit throughout the winter. The volcano contains two summit peaks of the same height

According to the official Chilean tourism site, this geological formation is 6,893 meters high. Although, National Geographic‘s Institute of Argentina and the Global Volcanism Program of the Smithsonian Institute estimate a height of NOS volcano as 6,879 meters. For its part, NASA’s Earth Observatory indicates a height of 6,887 meters.

The Nevado Ojos del Salado, regardless of its height, provides a spectacular view from the ground and in the air. It is part of South America’s famed Andes Mountains. It is located along the “Pacific Ring (or Belt) of Fire,” an area distinguished by frequent earthquakes and volcanic eruptions.

Climbers visit this location to explore it. Except towards the summit’s end, it isrelatively easy to go around in general. Mountains, salt flats, hot springs, and even a body of water named Laguna Verde dominate its surrounds, making it a popular tourist destination.

It features an extended top with several craters that overlays a partially submerged caldera, and it measures around 70 square kilometers. It is categorize as an active stratovolcano. This volcano is made up of multiple layers of pyroclastic flows. Despite the fact that it hasn’t erupted in a long time, the summit still releases fumaroles.

Llullaillaco is a dormant stratovolcano located on the Argentina-Chile border. It is located in the Puna de Atacama, an area of high volcanic peaks on a high plateau near the Atacama Desert, one of the world’s driest regions. After Ojos del Salado. it is the world’s second highest active volcano among mighty volcanoes.

Dacitic lava flows formed Llullaillaco in two periods during the Pleistocene-Holocene period. Oldest rocks are formed about 1.5 million years ago. Its southeastern slope fell about 150,000 years ago, causing a debris avalanche that extended as far as 25 kilometres (16 miles) from the peak.

Stratovolcano Llullaillaco rises 2,200 meters above the surrounding area. The structure is oval in shape. It measures 23 by 17 kilometres. Thick dacitic lava flows erupted during the Quaternary, forming it.

Top of this volcano is formed by lava flows and these flows stretch away at the bottom. Older ‘lava flows’ reach west of the volcano. Therefore, such ‘lava flows’ are partially hidden by strata closer to the structure.And these lava flows can be up to 20 kilometers (12 miles) long and cover around 70% of the volcano’s surface.

Llullaillaco’s top is created by a tiny cone with roughly four accompanying lava domes, which range from 1 to 3 kilometers in length and have steep walls.

Also Read : The top 5 most weirdest places in Pakistan

On number three, we have Tipas Volcano (also known as Cerro Walter Penk) volcano. It is a massive complex volcano in the Andes. It is located in northwestern Argentina. Based on the study, this Volcano is listed as the third highest active volcano in the world. However, it is poorly known because of its isolated location. Cones, lava domes, and lava flows form a 25-square-kilometer area of the Tipas volcanic complex.

It has a young morphology and its most recent eruptions are likely to have occurred less than 10,000 years ago. The Tipas-Cerro Bayo complex was active 2.9-1.2 million years with dacites and rhyolites. Magma composition is typical for Andean stratovolcanoes. However, Tomographic studies of the underlying crust indicate a pattern of seismic attenuation beneath Tipas. It has an official height of 6658 meters.