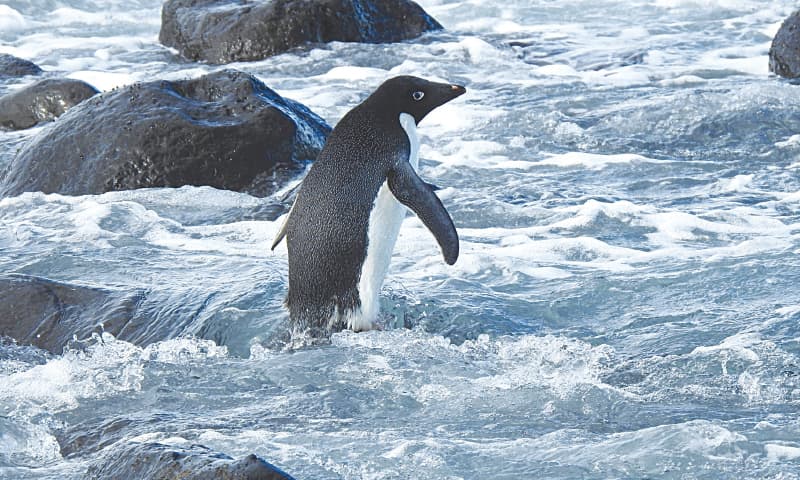 Due to climate change or pollution, a rare Adélie penguin swims 3000 kilometers from Antarctica to New Zealand. Experts are saying its a worrisome situation for the marine life.

CHRISTCHURCH, SOUTH ISLAND – For the third time a rare specie of penguins, Adélie penguin makes its way from Antarctica to shores of New Zealand. He swims around 1900 miles from his hometown. The juvenile male Adèlie, affectionately nicknamed ”Pingu” by locals, reached Bridlings Flat Beach near Christchurch on Wednesday night.

Seems like he came to find some food and warmth. Adèlie, a rare penguin specie only found at the coasts of Antarctica, more likely lost its way home to new Zealand. This critically endangered specie is on the verge of extinction by 2060.

Lost and hungry young bird was found by a local, named Harry Singh. He and his wife lives by the coast. His wife saw something and called her husband. Initially he thought she found a blue penguin. But it turned out to be rarest one. Bird did not move for an hour.

They thought it was a stuff toy until it moved its head. Apart from exhausted and dehydrated, penguin was not too bad. Whereas Rescuer fed him some food and fish smoothie via feeding tube. They stayed there because they did not want him to be fed by any stray dog or cat.

Also Read: The Indus Blind Dolphin : Near to Extinction

Later he got rescued by rehabilitation center run by Thomas Stracke. Moreover he was treated by proper medicines and blood tests. He was relatively underweight and weak when found. After a week of treatment and care he was released to its hometown safely.

Earlier an adult corpse was also discovered north of the Flaxbourne River Mouth in Marlborough in December 1962, and a live bird was found in Kaikoura in January 1993.

Scientists are worried about marine life

Adélie spotting remains rare in New Zealand, but if more of them appear in the future, it could be a worrying sign, say experts. “I think if we started getting annual arrivals of Adélie penguins, we’d go actually, something’s changed in the ocean that we need to understand,”

Otago University, Zoology Professor, Philip Seddon told, “More studies will give us more understanding where penguins go, what they do, what the population trends are like – they’re going to tell us something about the health of that marine ecosystem in general.”

If penguins keep showing up like this, it is a great threat for our ecosystem. That means penguins are not getting enough food and fish in their home. Its an alarming situation for whole mankind. It should be taken care as soon as possible.