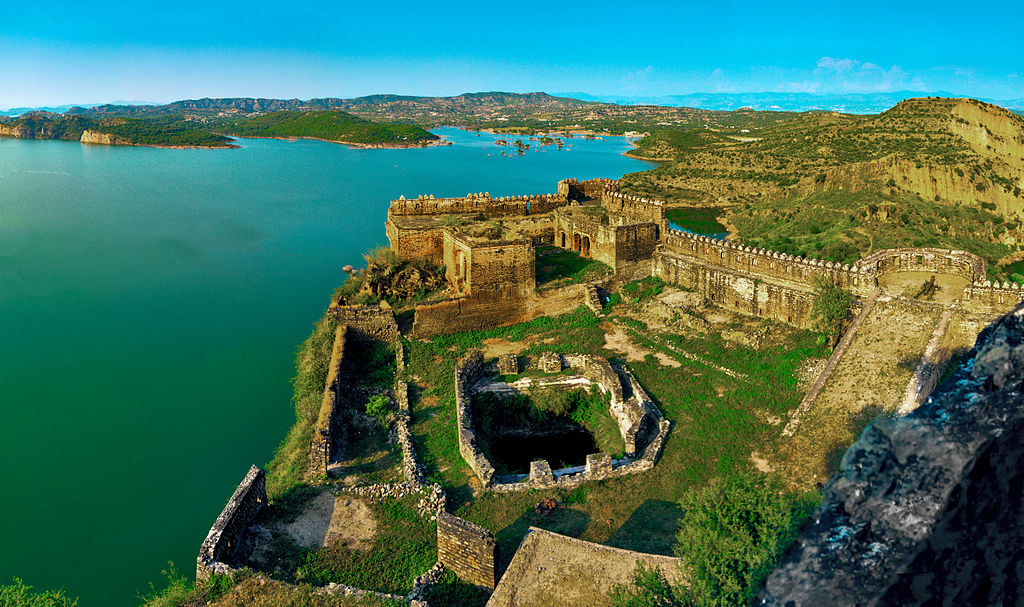 A massive establishment of 16th century is in limelight name as Ramkot Fort. Now by the power of social media, it slowly turning into a famous yet intriguing tourist point.

Dadyal, Azad Kashmir Pakistan: If you are sight seeing Azad Kashmir. An amazing tourist spot is waiting for you in the midst of river Jhelum. Exact location of Ramkot fort is 13 kilometers away from Dina and 79 kilometers by road from Mirpur Dadyal town. It is also accessible from Gujar Khan, via Jabbar and Notla then using boat. Three sides of fort isurrounded by River Jhelum. It is difficult to access the fort in rainy or winter season. But otherwise you can hire a boat from Mangala Dam which operated by Pakistan army. Mangala dam can also seen from the top of the fort.

Way to fort is quite steep and difficult. It advised to tourists to wear comfortable shoes and bring food and water themselves. Boat ride of 30 to 40 mins and 15 minutes hike will get you to the eccentric fort in the history of mankind.

History of ramkot fort is vague and does not have any evidence. It said that fort built in 1008 by some Hindu in order to worship Mahadev Shiv. Since few excavations found which supposed to be from 5th and 9th Century. But according to local legends the fort built by Dogras of Kashmir in 16th Century. In 16th and 17th century Kashmir built a lot of forts for defense point of view. The design of ramkot fort resembles to fort of Muzaffarabad and few others. Location of the fort is strategically Muslim’s defense style. Canons and ramps shows that the fort took an active part in various wars and disputes.

Fort has seen many seasons in its life. But still it stands strong and tells its story of glory. It renovated countless number of times, so you can say it may have changed its original state. From Hindus to Muslims to Sikhs, it has all the colors in it. Historians cannot define the purpose of big water wells in the fort yet.

Discovery of Fort and renovation

Fort remain hidden until 1990s, when Dr Anis ur Rehman, head of the Islamabad-based NGO Himalayan Wildlife Foundation, first came across Ramkot on a fishing trip to Mangla. He accidentally discover this place. He contacted Ministry Of Archeology because fort was in mess. Ministry allowed the request of voluntary work on the fort. He uses his sources and made fort what it seen today. Removes all the dirt from the water wells, put canons as a symbol of defense. Pakistan Army donated canons to the fort but due to negligence and time, they completely broken now.

Fort again destroyed in the earthquake of 2005. After that Pak army took the control of fort and renovated it a bit. History has no mention of this fort But according to eminent travel writer, Salman Rashid, Frederic Drew, the appointed geologist to the Maharaja of Kashmir, casts some light on Ramkot in his work The Jummoo and Kashmir Territories: A Geographical Account, published in 1875. It built, he records, by a Gakkhar named Toglu. After the Gakkhars, the fort ceded to the Dogras.

If you don’t like rush places then this fort is the best picnic spot for you. Few difficulties but the experience of peace and tranquility you get, it will last forever.