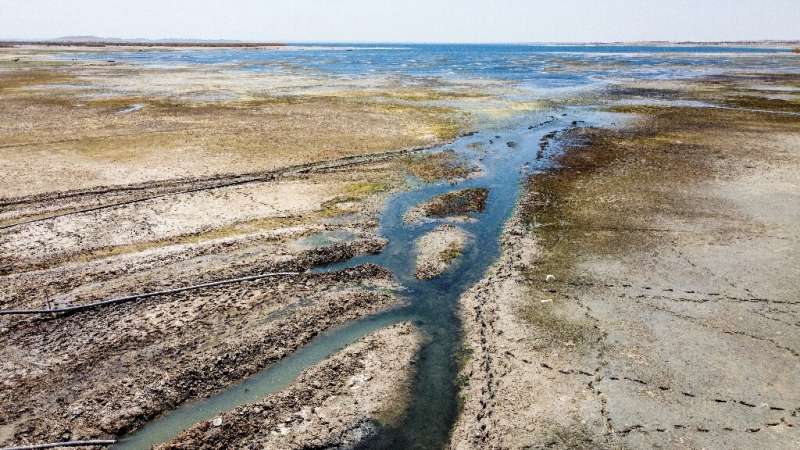 “Soon the river Euphrates will disclose the treasure [the mountain] of gold. So, who will be present at that time should not take anything from him.” – (Sahih Bukhari). A prediction made hundreds of years ago is getting real in recent times. Is this the end of the world or just a hoax?

The Euphrates River, also known as Nahr al Furat, is the longest and one of the most historically important river of Western Asia. The river is also most important because it holds the sign of Qiyamah, Almighty Allah’s final assessment of humanity. The river is about 2800km in length and its basin size is about 4,40,000 square kilometers. Three countries Turkey, Syria and Iraq shares the water favors from decades. River Euphrates And River Tigris are the main source of drinking and irrigation in these countries. But from 1999, due to 12 barrages on the river water starts to dry up rapidly.

Turkey use to stop water in its dams and release it when necessary. It causes the river to change its direction and ends up drying in its native place. Now people specially in Syria are suffering the water shortage the most. Women use to walk for 7 hours to get one bucket of clean water. Farmers of rice and cattle are moving because of no water. According to experts Euphrates will completely dry in 2040. It causes a major economic crises in the chaotic country. If this situation continues then prediction of Prophet (SAW) will came true in no time. And a major war is waiting for humanity to destroy themselves. After that Imam Mahdi AS will reveal himself and save the humanity.

Predictions for the dooms day in Quran and Bible

River Euphrates holds an importance place in world’s history. Earlier Incident of Karbala has also taken place here. A lot of predictions about dooms day includes Euphrates. The Prophet Muhammad said: “The Hour will not come to pass before the river Euphrates dries up to unveil the mountain of gold, for which people will fight Ninety-nine of every hundred will die [in the fighting], . and every man among them will say, ‘Maybe I’m the only one to remain alive’. “- (Sahih Bukhari, Sahih Muslim). In another prediction the gold will not reveal itself unless its been 12 years of chaos in Syria. We witnessed war of Syria from 2011, so if the calculations are right, river will show gold in 2023 and so is a War.

A verse in bible says that river will show Black gold and it can cause a massive rift between all nations. It will cause a major war that can be World War 3. As per the prediction only one or two percent of population will survive. In bible they call this was Armageddon and Muslims calls it “al-malhama al-kubra”.

For a longest period of time it was assumed that Gold in this predictions means Crude Oil. Because oil is usually referred as black gold. “Turning Blue gold into Black gold” is a famous definition of this prediction. But recent findings and researches shows that the last and the most brutal war will be on Warm Water. It is evident that world is running short on petroleum and other power sources. But water is a basic need of entire humanity. 9 kids died every hour because of drinking dirty water.

So it is a possibility that nations will fight with each other to get fair share of that gold as well as water reservoir. Whether its a Water or Oil, only time will tell. But till then we must ready ourselves for upcoming dark times. It is also said in the prediction that anyone who tries to use this gold will suffer. So it is definitely a 4th and the biggest fitna before Dajjal will show up.