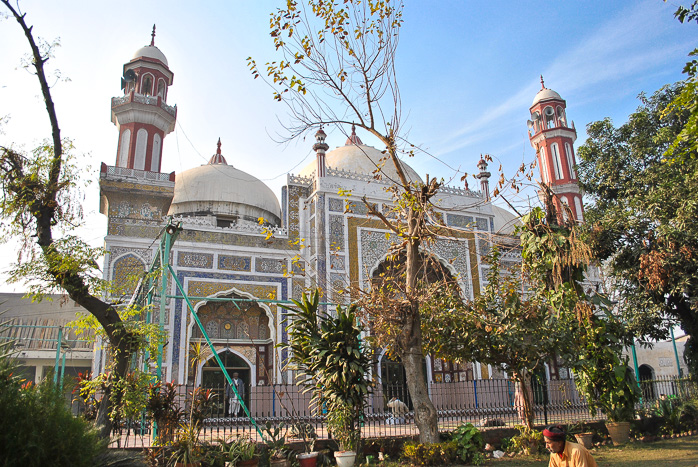 A beautiful mosque in the populated city of Lahore. Tells an amazing tale of love and loyalty. Another Mughal’s appealing leftover is Dai Anga Mosque in Gulabi Bagh.

Mughals has ruled Asia for hundred’s of years. Their services towards common man written in every history book in the world. One more thing is mention along with their love towards God and common man. Gratitude towards their loyal companions. They pays them tribute in pure Mughal style and fashion. One of the example is Dai Anga Mosque in Gulabi Bagh, Lahore. A mosque that built in accordance to acknowledge services of their trust worthy wet nurse. Along with that it also shows the influence and respect of Dai Anga in Mughal’s Cabinet.

Dai Anga whose real name was Zaib Un Nissa. She was the wet nurse of Mughal Emperor Jalal Uddin Akbar. Her husband Murad Khan served Emperor Jahangir as Magistrate of Bikaner. And her son Muhammad Rashid Khan, was the best archers in the kingdom, and died fighting in the service of Shah Jahan’s eldest son Dara Shikoh. Loyalty embedded in the blood of this family. She was so trust worthy that King himself take advice from her on Kingdom’s problems.

Mosque and its whereabouts

Mosque built in 1635 but according to inscription it completed in 1645 in Sikh rule. It built prior to Dai Anga travel for Hajj that year. The stone work and carving resembles to Badshahi mosque and Masjid Wazir Khan. But it has its own unique aura. It has 3 domes. The paintings and colors refers to Qashani art of work. Blue, Yellow and Orange are the dominant colors in its decoration. It is rather small mosque than rest of famous mpsques. But it was the most used mosque in that period of time.

After the downfall of Mughals it turned into office. British workers use to work here and it was the residence of few officers as well. Later it became the prayer area of Sikh Community. It was once the residence of Raja Ranjit Singh. In 1903 it became a fully functional mosque again. After partition it neglected and hidden for decades. The beautiful building was rusting with time and glare.

Now the mosque listed on the Protected Heritage Monuments of the Archaeology Department of Punjab. Few funds given for its maintenance. Its an amazing tourist’s point if taken care of. This colourful and majestic mosque is located in the Naulakha area, southeast of Lahore Railway Station, which is one of the oldest stations and has witnessed seasons of turbulence and tranquility in Lahore. The location of the mosque is of immense importance.