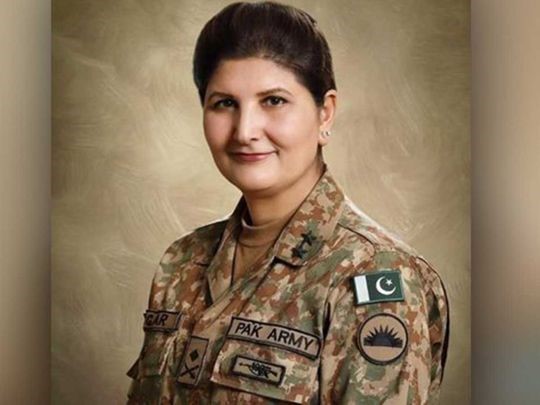 Last year in June, Major General Nigar Johar created history by becoming the first female officer to be promoted to the rank of Lieutenant General owing to her spectacular performance in several leadership.

Nigar is the daughter of Col Qadir, who served in the Inter-Services Intelligence (ISI) and is the niece of retired Maj Mohammad Aamir, a former Pakistan Army officer who served in the ISI as well. She is not only the first female to be promoted at the rank of lieutenant general, but also a sharp shooter.

Nigar Johar was born in Panjpir village in the Swabi District of Khyber Pakhtunkhwa province to a Pashtun family. Her father, Qadir, was an army colonel. Both her parents along with her two younger sisters died in a car accident in 1989. Her husband, Johar, an Engineer in the military, died in 2019 due to cancer.

She completed her schooling from Presentation Convent Girls High School, Rawalpindi and graduated from Army Medical College in 1985.

In 2015, she received a Master’s degree in public health from the University of Health Sciences, Lahore. She also has the honour of being the first woman officer to be given command of a unit/hospital of the armed force.

Powerful message for the girls

Brave lady is an inspiration for all the women of Pakistan;

While interviewing she said;

Being a woman requires you to work at least twice as hard, but once you are recognized for your resilience and work, you are respected twice as much. I have always focused on my work in order to succeed. I have worked with male colleagues and not against them. The glass ceiling is pretty high but Pakistani women are getting there, slowly but surely.

On June 30, 2020, Nigar was promoted to the rank of Lieutenant General. After that she appointed as Surgeon General of Pakistan Army. In 2015, she was the deputy commandant of the Combined Military Hospital Rawalpindi. On February 9, 2017 She was among the 37 brigadiers who were promoted to the rank of major general. She served as Vice Principal of Army Medical College. Currently she is Surgeon General of the Pakistan Army. She also served as the commandant of Pak-Emirates Military Hospital, Rawalpindi.