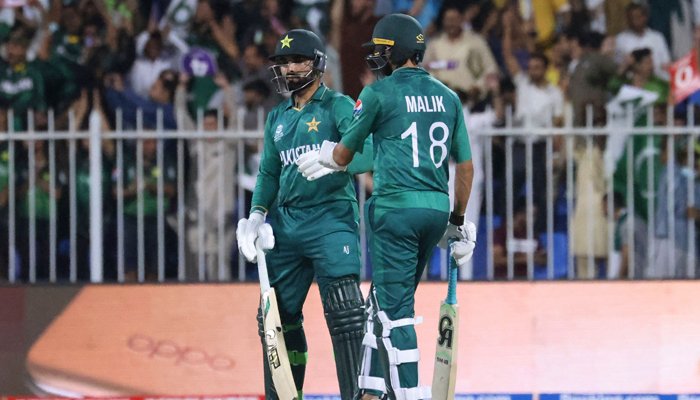 Pakistan won the intense match with 5 wickets and 8 balls left. People are claiming this victory to be the perfect reply to New Zealand’s walkover

The Pakistan cricket team on 26th October, won against New Zealand cricket team. This was the teams second match and also the second victory in the T20 world cup. This victory however wasn’t as easy as the previous one with India. This match with New Zealand involved a whole lot of intensity and serious turns, making it much more exciting.

The match started off with Pakistan winning the toss and choosing to ball. The decision to ball first, was surely a good one since Pakistan’s balling side performed exceptionally well. Batsmen from New Zealand, faced constant strong balling spells and were only able give a 135 runs target.

After choosing to ball, Shaheen Shah Afridi came to ball in the first over. The left handed fast bowler, delivered an excellent over and gave 0 runs in the first over. This control over New Zealand’s Batsman continued throughout the match. New Zealand’s control on the pitch was commendable. It was not until the sixth over that NZ lost a wicket.  Martin Guptill came back to the pavilion after Haris Rauf took his wicket. By this time NZ had 5 fours and 1 sixer with a total score of 42/1.

While New Zealand showed a great game on the pitch, Pakistan’s bowling was worth appreciating. In the end New Zealand lost 8 players and gave Pakistan a target of 135 runs. It was Pakistan’s turn to bat now.

The Pakistani team started of with its opening batsmen, Babar Azam and Mohammad Rizwan. This was the same duo which started the match with India and remained on the pitch till the end. Expectations were high from these two. Tim Southee from New Zealand then separated Pakistan’s fav duo and Babar Azam in the sixth over went back to the pavilion unfortunately after his wicket went down.

Fakhar Zaman replaced Babar. His stay on the pitch remained short lived. Fakhar left the pitch in the ninth over after an LBW out. Muhammad Rizwan maintained his position till the 12th over and left the pitch through an LBW as well. Pakistan by the 16th over had 5 wickets down with only 97 runs in hand. The country was on its toes and the anxiety was building up. Pakistan was constantly playing on dot balls and winning seemed a little out of reach. However hopes remained.

In the 17th over, Asif Ali managed to give two consecutive sixes and Pakistani’s regained hope. In the 18th over Pakistan’s score jumped to 126/5 from 111/5 in the previous over with Shoaib Malik scoring a six and a four. Shoaib and Asif Ali’s partnership proved to be iconic and Pakistan managed to achieve the required target with only five wickets down.

Both the sides shook hands and Pakistan celebrated its second win.