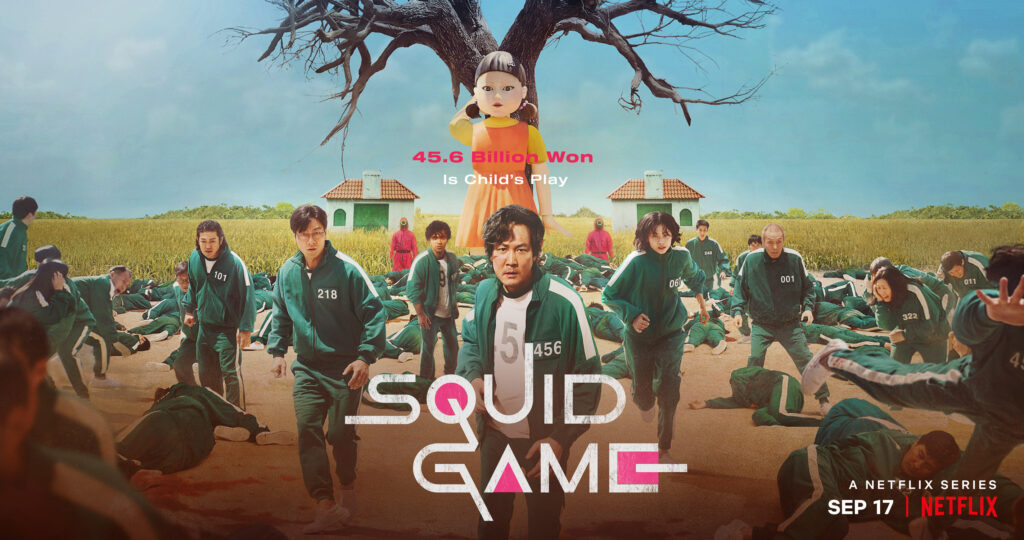 Squid Games just after 2 weeks of its release has become the first series to top charts in 83 countries. The action filled series is set to steal seats from hit shows such as ‘House of Cards’ and ‘The Crown’

This year on 17th September, Netflix released another one of its series named ‘Squid Games’. This series however was no ordinary Netflix Original. Squid Games in just weeks of its release, went onto top the charts in many countries. Squid games’s popularity is nothing less than an epidemic, the series since its release have been consistently breaking records for Netflix.

Netflix users in the US are going crazy over the show, considering the viewership in the US, the show will soon break records of super hit series such as ‘Bridgerton’. To explain the global impact of the series, analyst are using India as an example. This is because Indian Netflix users have always preferred locally made shows, Squid games however have also topped ‘Kota Factory’ which is a local hit in India. Considering the current growth rate, Fortune Magazine quoted that “The show is now expected to be seen by more than 82 million subscribers worldwide in its first 28 days [since its release]”.

Though it took a while for the show to gain traction in many countries, it is now grabbing viewers at a lightning pace. Squid Games just recently became the most watched foreign series in the US taking the famed Lupin’s place. Netflix CEO ‘Ted Sarandos’ said that Squid Games is the series he is most thankful for, he said the reason is the popularity it has received.

Details of the show

Squid Games is a series that circulates around an insanely large prize money of 45.6 billion won(Korean Currency). To win this insane prize money, the players have to go through a list of games. All 456 players of the game are those burdened with insane amount of debt and life a troubled life with no money. All the players have to compete each other in the games and the one left till the final is who takes home the massive prize. Well, this might seem like a simple series, the players in the series either die or successfully pass a game. The element of facing death or winning the game is what has added life to the series.

The games take place on a private stranded Island, where the organizers have built a huge space for the games. The first game of the series started of with a total of 456 players, the majority of whom died within that game. The rest live on to compete for the next few deadly games. While the players did try to quit playing, there lack of money and troubled life led them to continue playing the game.

The Excellent Display of Emotion in Squid Games

While Squid Games is surely a nail biting thriller, another one of its overlooked quality is its character building. The series throughout all its episodes displays different characters and emotions. The series shows people that were neglected and put down by the society despite their efforts. The down ridden people through the games are given another chance to win fairly. As quoted in the series, “All participants in the game are equal. We are giving people who have suffered unequal treatment and discrimination in the outside world the last chance to win a fair competition”.

Met Gala 2021: All you need to know about this glamorous event