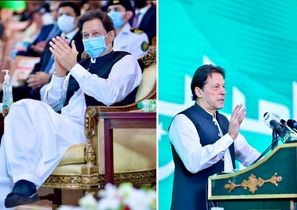 He also said that all the systems in Pakistan is mainly for the elite . PM then talked about the KPP will solve this problem in Pakistan. He then went onto call this program a ‘landmark’ and a ‘splendid’ idea.

After appreciating the Kamyab Pakistan Program. PM Imran Khan went onto talk about obstacles PTI government previously faced during the ‘housing finance program’. He said that the PTI government has now learned an important lesson from the housing program. It learned that Pakistani Banks do not have the correct infrastructure and training for offering loans to lower and middle class.

“A lot of time was consumed in overcoming obstacles and even when we had passed the foreclosure law, our banks did not have the infrastructure and training to give loans to people. We realized that by the time banks learn to give loans to more poor, our five years will be over”. He said regarding the obstacles faced during PTI’s housing program.

PM after discussing about the issue’s with large scale commercial banks said that for the KPP program, ‘microfinance banks’ are the way to go. With microfinance banks already well equipped with knowledge of offering loans to the lower and middle class, this surely is a great decision.

Following the announcement of using microfinance banks for the KPP, PM Khan pointed out the importance of turning Pakistan into a welfare state. “We made a huge mistake 74 years ago. We believed that we would make Pakistan a welfare state after there was prosperity and wealth in the country. The thought that there needs to be surplus first and then we (government) will invest in the poor. He also believed these were fundamentally wrong decisions.

The PM termed ‘humanity’ and ‘justice’ to be the necessary elements required for a country to grow. Keeping China and India as an example he said that both these countries were at the same level just 3 decades ago. China however is now developed while economic disparity in India prevails, he added. He then said that the reason behind China’s success is their utmost principles that are similar to the one’s of ‘Riyasat-e-Madina’.

The Educational Inequality in Pakistan

PM Imran Khan during his speech, highlighted an important and often overlooked problem in the Pakistani society and that is ‘Educational Inequality’. He once again termed an elitist economy to be the reason behind this problem.

The PM called the Pakistani education system a ‘huge shame’ saying that only a small part of the country gets to enroll in top quality expensive school while others are left behind. Thus the already rich prevails while one the one’s left behind do not progress.

“A different standard of education for one class [of society] and a different one for another — education apartheid. And then there were madrasahs. Nobody tried to synthesize it. This is one country, one nation, at least it should have a core syllabus. Our kind of elite was benefiting from it. Our children were getting good jobs so we had no incentive to change it” he said.

Details of the Kamyab Pakistan Program

The Kamyab Pakistan Program has 5 different components links the low income group with banks through microfinance institutions. Built to empower the lower income segment, the program will offer Rs1.4 trillion soft loans  to 3.7 million families across the country.

The five components of the Kamyab Pakistan Program are as follows:

This program will allow for farmers to take up interest free loans thus empowering them.

This program will allow people to take loans up to Rs 500,000 for setting up a business.

This program will allow people to get easy loans for construction of houses.

A program that offers, skill based scholarships to thousands of Pakistani students.

A card that can be used for treatment of any disease that requires the patient to be admitted in the hospital.