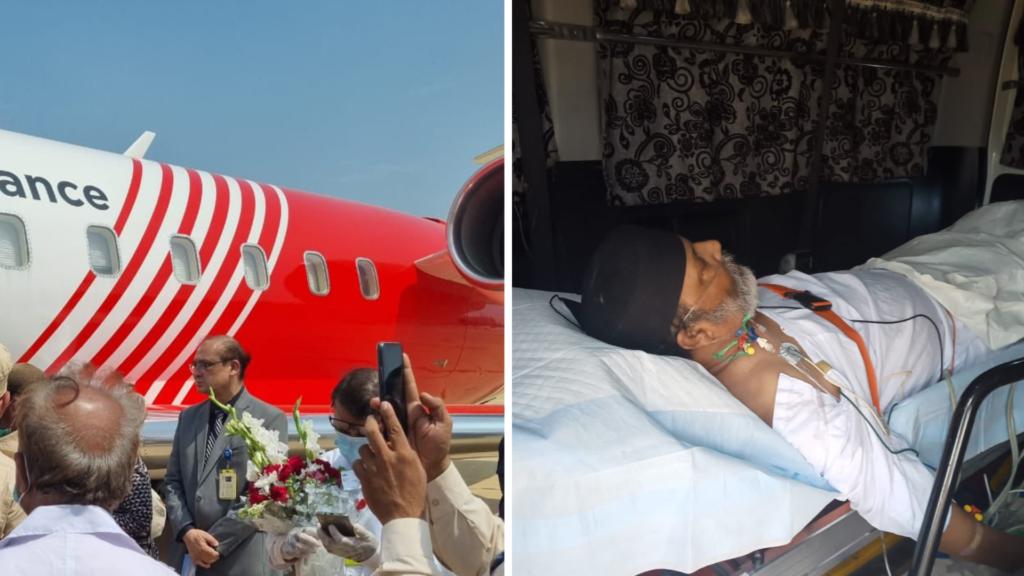 Assistance from Federal and Provincial ministries helped in Umer Sharif’s treatment. The famed comedian left for US on an Air ambulance.

KARACHI, PAKISTAN – On Tuesday 28th September, Comedian Umer Sharif left for the US, for further medical treatment. The comedian was first taken to the airport, where he flew off to US in an air ambulance. “He [Umer Sharif] has flown Shukar Alhamdulillah (with the blessing of Allah)”, confirmed a family member after Umer Sharif’s departure to US.

Sharif’s department to US, however has been a little delayed. He was first scheduled to leave on Sunday, September 26th, his health conditions however were not stable enough to let him go outside the hospital. Sharif was then shifted to the Critical Care Unit and was kept under observation till Tuesday. After his condition got better, a team of doctors examined him and then allowed for him to fly to US.

Umer Sharif has now been under treatment for quite some time. The comedian’s illness gained spotlight after photos of him started circulating on social media channels. Soon after the spread of videos and photos, both the federal and provincial government stepped in and granted funds for his treatment.

PPP Representative, Murtuza Wahab, who has been highlighting Sharif’s condition, explained the recent situation on Twitter. Wahab on his Twitter previously notified that Umer Sharif will fly to US. Today Wahab tweeted that “Umer Sharif Sahab is on his way to the airport for his flight to Washington”. He then urged people to remember the comedian in their prayers.