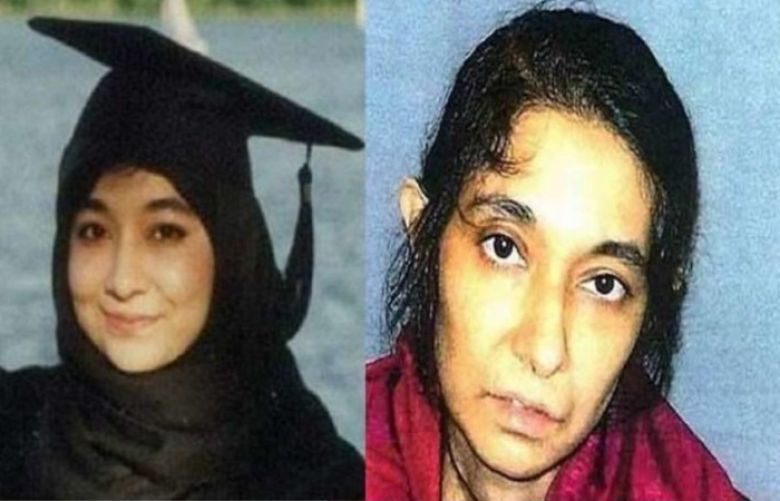 Dr Aafia Siddiqui is a Pakistani born US Neuroscientist who wrongly accused of assaulting and operating weapons. Nation is in constant struggle and pray for her release and good health.

Pakistan is under cold war with terrorism for so long. It has to sacrifice a lot in this cause. We lost so many soldiers and great leaders in this war. But one loss that nation cannot bear to this date. That loss is of Dr Aafia Siddiqui. She is born on 2 March 1972 in a Pakistani Family. She was always a bright student . Her academic credentials are amazing and impressive. In 1990 she went to USA for further study. In 1995 she married to a doctor Amjad Khan and had 3 kids. She got a Ph.D. degree in neuroscience in 2001 from Brandeis University. She returned back to Pakistan following 9/11 but her life was about to change forever.

Dr Aafia Siddique was a social work activist. She registered her voice for what is happening in Afghanistan, Bosnia and Chechnya. She wrote emails to the authorities and made sure that Muslims considered as humans in every walk of life. After the attack of twin tower she had to return Pakistan. FBI Questioned her and her husband for unusual purchase. That purchase include of Night vision Goggles, armor suits, etc. Whereas they don’t have enough proof so they had to release them. Here her marriage starts trembling.

In 2003 she get mysteriously missing for 5 years. In the start it was a rumor that ISI and Pakistan Armed forces involved but later revelations were much dark. FBI kidnapped her on the accusations of relations with Al Qaida. She portrayed as “Al-Qaida Mom” in New York Times. Dr Aafia Siddique variously called the “Mata Hari of al-Qaida” or the “Grey Lady of Bagram” by FBI and American media.

Her three kids also kidnapped simultaneously. Dr Aafia was facing the barbaric torture of her life. She kept in men’s prison. She assaulted physically as well as sexually. In one of the torturous interrogation she chanted Allah o Akbar and one of the soldier start hitting her with a gun. He kicked her continually in the gut since she passed out. Later on the trial she was accused of attacking a solder and killing of few prison mates. In 2008 final trail she was sentenced to prison for 86 years.

Since her conviction her sister Fauzia Siddique along with whole nation is trying to get her back. Aafia Siddiqui was a promising doctor as well as human being . her loss is nation’s loss. Recently it was a headline that she is minor injured in the jail. All the NGOs and family wants to know about the incident but so far no progress. A resolution has passed in the assembly to bring her back. All the authorities and people are trying their hard to bring back daughter of the nation. But maybe still a long way to go.