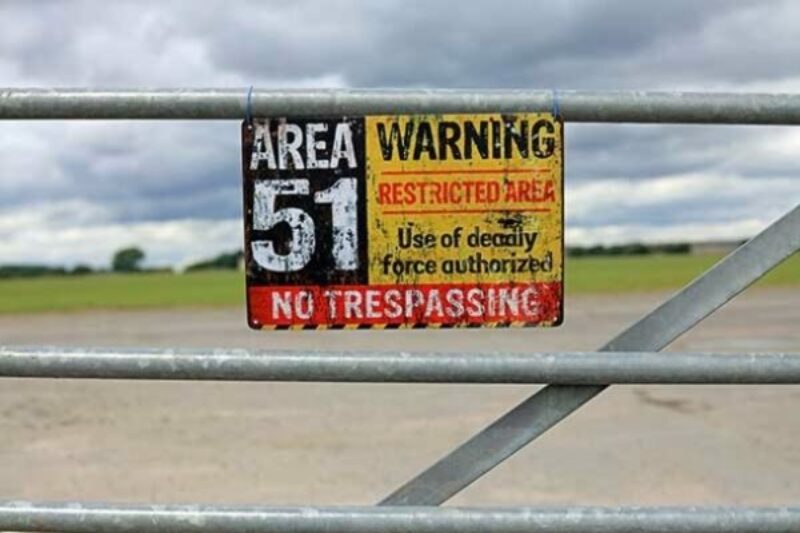 Area 51, an Army Base but famous for aliens and UFOs. A highly secured area became a meme in 2019 for all the wrong reasons.

NEVADA, UNITED STATES OF AMRICA – A 2.9 million acre area covered under high surveillance and security known as Area 51, other names are Homey Airport or Groom lake. Officially the area was named ”The Nevada Test and Training Range” at Groom Lake.

It is situated besides a dry lake. This vast space is commonly used for training US Air force. Trespassing of common man is strictly prohibited. When your entre into a 100 meter radius you can see different kinds of warning signs. Air space is close for any activity. Around 1500 men work here. Area is under high security and all operations are done under CIA.

Area 51 was made in 1955 in order to train army for cold war going between USA and Soviet Union. After that the area started using as base for training. From small weapons to drone, each weapon tested here. It is a far away land where no civilian can be harmed by any mean. This location was a secret until August 2013. CIA revealed about their operation in Area 51. Then Barak Obama used the name in one of his speech. After that this high profile location got exposed into public’s eyes.

In 2019, a person named Matty Roberts claimed that there are aliens and UFOs present in area. He created an event named as “Lets storm Area 51”. It was also named as “They cant stop us at all”. The alleged raid expected on September 20,2019.

It was actually inspired by some Japanese Anime “Naruto“. Later he confessed that he was only joking about all the thing. But by then nearly 1.5 Million people got interested in the said event. Soon it was a rage all over the country then in the world.

Government was taking all the steps to prevent people from staying away from Area 51. But it was all over social , print or electronic media. On the day of “Raid” extra security was placed in order to avoid any accident. Despite of all the hype and popularity only 150 people showed up to raid. 5 people caught trying trespassing the area. One person arrested for indecent exposure. Moreover 1,500 people were found attending alien-themed music festivals in nearby Rachel and Hiko, Nevada.

Claim of presence of Aliens and UFOs

It was not the first time when Area 51 is accused for having aliens. In 1947 a person claimed that he saw a weird flying object in the area. Later authorities said that it was just a hot air balloon. In 1989 another claims of witnessing aliens and UFOs arises. But they all refused harshly.

A worker claimed in 2015 that he saw aliens and people at Area 51 are doing experiments over him. But none of the claims and charges proved right. So whether there are aliens are not. Area is undoubtedly one of the mysterious places on earth.