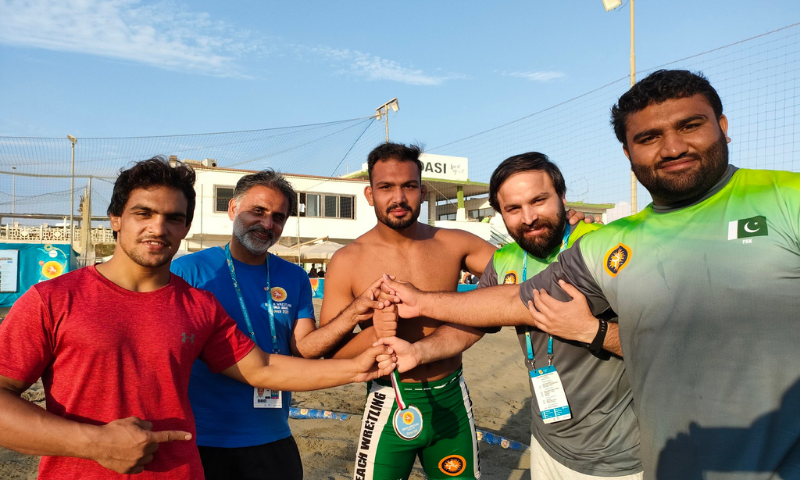 Inam Butt, throughout the tournament, performed exceptionally well organized in Italy. The champion managed to beat the Ukrainian finalist by a score of 3-0.

Inam contested in the 90 kilogram category and dominated throughout the competition. In the finals, Inam made his way to the gold by beating his Ukrainian opponent. Inam completely dominated the finals and had a 3-0 score thus making him win the medal by a large score. The finals were not the only time we saw Butt dominate his opponents. The 32 year old won all three rounds against his Slovenian opponent ‘Mihai Nicolae Palaghia’ in the semi finals.

Inam is born and trained in Gujranwala located in the Punjab province, which is a place famous for its wrestlers. He will now also be amongst the top wrestlers Punjab province has birthed.

Soon after winning the competition, Imam came out on his Twitter and posted a video about his victory. In the start of the video he announced his victory and said, “Alhamdulillah, by the grace of God I have won the World Beach Wrestling Series in Rome, Italy”.

Following the announcement, Butt started making important appreciations and dedications. The wrestler in the video credited the Pakistan Wrestling foundation. “Most of the credit for this feat goes to Pakistan Wrestling Federation. Luckily, today our new body has been elected and today I have earned the World Champion title for Pakistan”, he said.

The champion then started individually thanking people and organizations that helped him throughout his journey. He said, “I want to say huge thanks to Pakistan sports board minister, Fehmida Mirza, and DG Asif Zaman. They have helped me a lot, we weren’t getting visas. Because of their efforts, I got the visa and got the opportunity to play here”. Apart from that the Punjab sports board and the Olympic association also received thanks in the video message.

On the title of his tweet, the wrestler wrote that he wanted to dedicate the medal to all sport institutions in Pakistan. Imam’s medal and his video is a proof of the fact that when different institutions come together, they can surely help make Pakistani athletes do wonders in International competition.