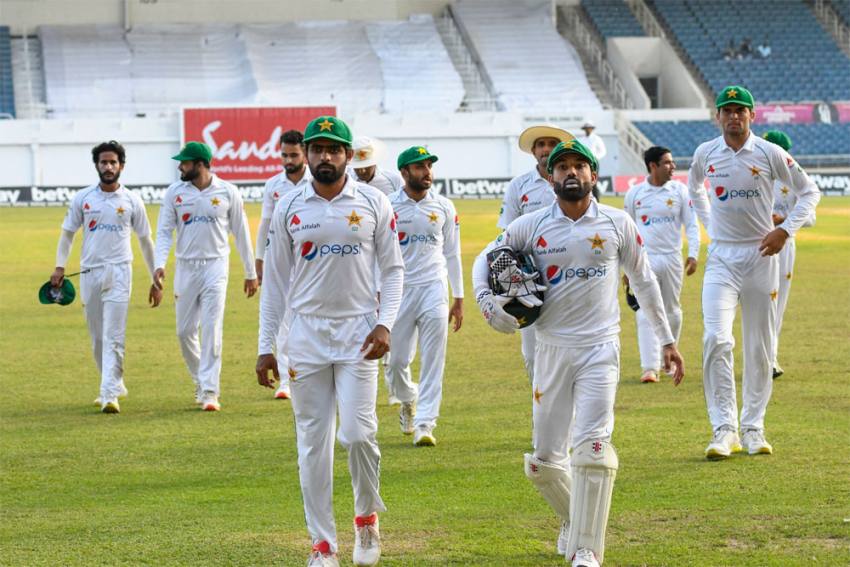 Shaheen Afridi with his exceptional bowling skills on the fifth day, lead the team to victory. Alongside Shaheen, the whole team performed well and made Pakistan win the PAK vs WI second test by 109 runs

Pakistan on Wednesday August 25, won its second test in the PAK vs WI test series. With this victory Pakistan levelled the test series and maintained its record of never losing a test series against West Indies in 20 years. The rain cursed Test match went on for 5 days, with rain completely destroying the last 3 days. The constant rains made the weather humid and the field wet thus making it difficult for batsmen’s.

Throughout the match both the bowling and batting side performed exceptionally well. The weather conditions being difficult for batting. However, Pakistani batsman including Fawad Alam & Babar Azam were able to give good performances. This largely increased the score for Pakistan.

Apart from the batting side, it was actually Pakistan’s bowling side that fought hard in the last 3 days. Bowlers including Shaheen Afridi, Hassan Ali, Nauman Ali and Mohammad Abbas all performed good. These bowlers were able to take crucial wickets and effectively stopped the Indies from scoring.

Day 5: Indies to chase a large target with fiery bowling from Pakistan’s side

With Pakistani batsman giving an excellent performance on the 3rd and the 4th day, they managed to give the Indies a good lead. Upon the end its batting on the 4th day, Pakistan’s batting side were able to lead by 329 runs, thus giving the Indies a large target to chase on the final day.

The 5th and final day started off with high hopes for Pakistan. With a large target and a ball favoring pitch, the Pakistanis were optimistic for their victory. West Indies continued their left off innings with 49 runs and a wicket dropped. Braithwaite and Joseph continued and were able to score a few quick boundaries before Joseph got caught out in a delivery by Shaheen Afridi.

Bonner came in right after Joseph and was able to put together 7 runs for the team before getting out in an LBW delivery by Hasan Ali. Chase that came in right after Bonner also met a similar fate and was caught out on zero runs thus giving Pakistan about 4 wickets at only around 73 runs.

Braithwaite however was performing much better than other batsman in the Indies. Soon after Bonner Braithwaite managed to establish a good partnership with Blackwood and took the team score into triple digits. Blackwood however got caught out in the slip leaving Indies to be at 101 with 5 important wickets down.

The second session of day 5 started off with the Indies at around 113 and still large numbers away from their target. Into the first few balls of the session, Braithwaite also got caught out thus Jason Holder came to bat. Both Holders and Mayers showed incredible batting skills and took Indies to the 160 runs mark.

With this partnership things started to look bad for Pakistan, however Shaheen came to the rescue. Shaheen on the third ball of his over was able to turn down Mayers thus eliminating a major wicket for the team. Rain soon followed after the wicket thus stopping the play for a small time.

Jason Holder caught out right before his quick half century

After the rain, the match continued with Holder and DA Silva batting this time. Holder was trying to score quick runs and showed a quite classy play. The right handed batsman picked up quite a few boundaries thus quickly rising his score to 47 on around 80 balls. However, things didn’t went right for Holder, he was caught out and missed his half century by 3 runs. West Indies were now 200 for 8.

Winning the 2nd test by 109 runs and levelling the PAK vs WI test series.

With only two wickets left for Pakistan, it was clear that it would win. Roach that followed after Holder, was also soon eliminated in an LBW delivery by Shaheen Afridi. Shaheen once again in the 83rd over delivered a fast paced ball towards the leg side. DA Silva however did not placed his shot correctly and the ball met Faheem Ashraf’s hands. With him being the final wicket Pakistan was able to win the 5 day long second test match. Since Indies won the first test, this victory levelled the 2 match test series.