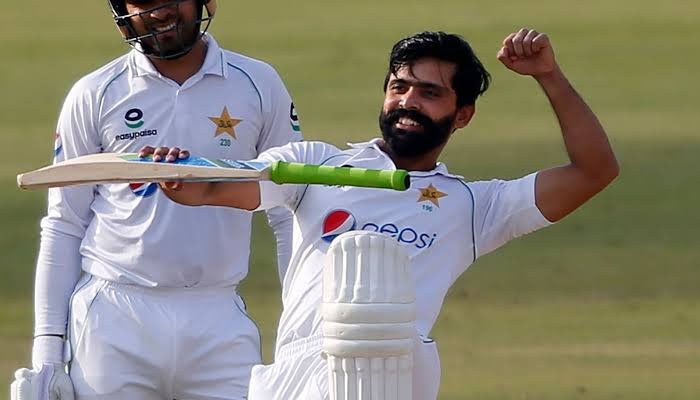 WEST INDIES – Batsman, Fawad Alam on the 3rd day of second PAK vs WI test match, scored an excellent century. With the 2nd day being destroyed by rain, Fawad on the third day continued his innings. Fawad throughout his journey to 100, scored multiple boundaries and showed exceptional batting skills.

The batsman scored the 100 runs on 186 balls and celebrated in style with a wide smile on his face. Fawad with his century not only brought up the hopes of levelling the series but also became the fastest Pakistani to register 5 Test hundreds.

Fawad after his hundred went onto make a total of 124 runs before the session ended and West Indies came to bat. This century was an addition to the outstanding performance Fawad has been giving in recent days. After years of not playing in the team, Fawad has proven that he is a gem the team was missing out on. The performance is indeed a reply to people and selectors opposing of him being in the team.

In an interview with journalist after the day ended, Fawad with a smile on his face said, “I want to dedicate this century to my parents”. He further revealed that his mother predicted his century even before the match. “I spoke to my mother over the phone before the match. She told me I would score a century”, he added.

The journalist then asked him about his batting experience in the second PAK vs WI test match. Fawad to this replied that it was difficult since both the pitch and the weather were unfavorable towards the batting side. “It was too hot and humid”, the batsman added.

Hopes for Pakistan levelling the series

In his interview with the journalist, Fawad expressed his happiness on scoring 5 centuries in 5 countries. He then also talked about how he thinks Pakistan might win the second test and said that if Pakistani bowling side performs good and drop quick wickets on a low score, they may win. He further said that Pakistan will try to drop West Indies wickets as early as possible.

Fawad’s excellent innings and century were the main contributors towards the hopes for Pakistan. The 124 runs by Fawad added almost half to the teams total of 302 runs. This is surely a difficult target for West Indies considering that the pitch is not favorable for batting.

With Shaheen Afridi’s and Fahim Ashraf dropping the first three wickets of the home side on only 39, the situation sure looks bright for Pakistan.