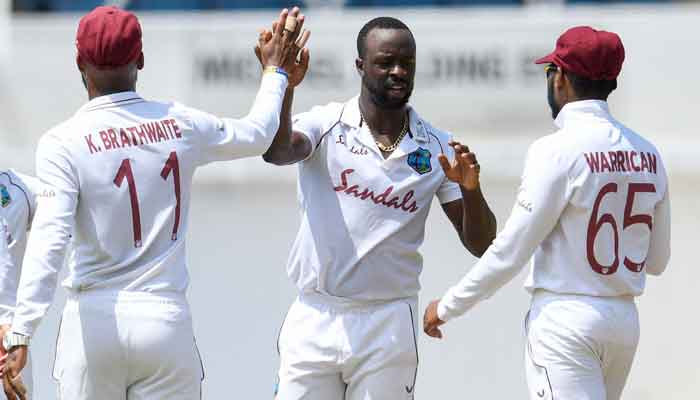 Carlos Brathwaite carried West Indies to the lead with his excellent innings. He made 96 runs on 220 balls and spent more than 300 minutes on the pitch.

After Pakistan’s batting on day one of the 1st test match, West Indies had to continue the major part of its innings on the second day. Pakistan’s balling side initially made things difficult for West Indies. Major wickets including Roston Chase and Jermaine Blackwood were dropped in the starting of the match. However, West Indies captain ‘Kraigg Brathwaite’ alongside right handed batsman ‘Jason Holder’ was able to hold the ground. Their partnership gave Indies a good amount of runs in the later half of the day.

Day 2 of the first test started off with the Indies continuing their innings. The day started with Indies already being down by two wickets. Brathwaite and Chase started off the innings. Both the players in the start played it safe, but still managed to get a few boundaries in Shaheen Afridi’s over. The partnership patiently managed to score a total of 51 by the 20th over, however was broken when Chase was caught out by Pakistan’s wicket keep Muhammad Rizwan.

Shaheen Afridi’s excellent deliveries in the 38th over

The partnership continued in the second session and managed to take Indies to the 100 runs mark. However, Shaheen came to ball in the 11th over and took Blackwood out by a catch on the very first ball. After Blackwood came in the excellent left handed batsman ‘Kyle Mayers’. Mayers on his very first ball faced an excellent short length ball, which resulted in Mayers getting ducked by an LBW.

The partnership that brought West Indies closer to the lead

The Indies were trail by 117 runs when Jason Holder came in to bat. Braithwaite at that time was already near a half century. Holder and Brathwaite carried off an excellent partnership from their onwards. Both the players managed to play excellent drives and covers thus getting a lot of boundaries. Brathwaite in the 45th over scored his half century with a boundary.

After the 45th over, Holder started to pace up his runs and scored quick boundaries. The right handed batsman managed to give some exceptional strokes and hit multiple fours. This significantly increased Holder’s score and brought it to 30 runs in 66 balls.

The next session started with the partnership still strongly continuing. West Indies at the start of the session had a trail of 67 runs. However, with Brathwaite and Holder hitting multiple boundaries the trail significantly started to decrease, thus putting pressure on Pakistan’s balling side.

Holder soon completed his half century and received applauds from the stands. After 8 more runs, Jason’s innings met an end when Faheem Ashraf’s ball edged from his bat and reached the hands of the wicket keeper. This broke a partnership of around 136 runs between Brathwaite and Holder, it was due to this exceptional partnership that West Indies was able to lead.

Indies to the lead

After Holder’s wicket, Indies had a trail of 21 runs. However, captain Brathwaite continued on scoring excellent boundaries bringing the trail to 3 runs. Just near his century Brathwaite got run out at the 78th over leaving DA Silva and Roach to bat. By the 80th over Indies gave Pakistan a lead of 6 runs. The lead further increased in the later overs and the first day ended with West Indies leading by 34 runs.