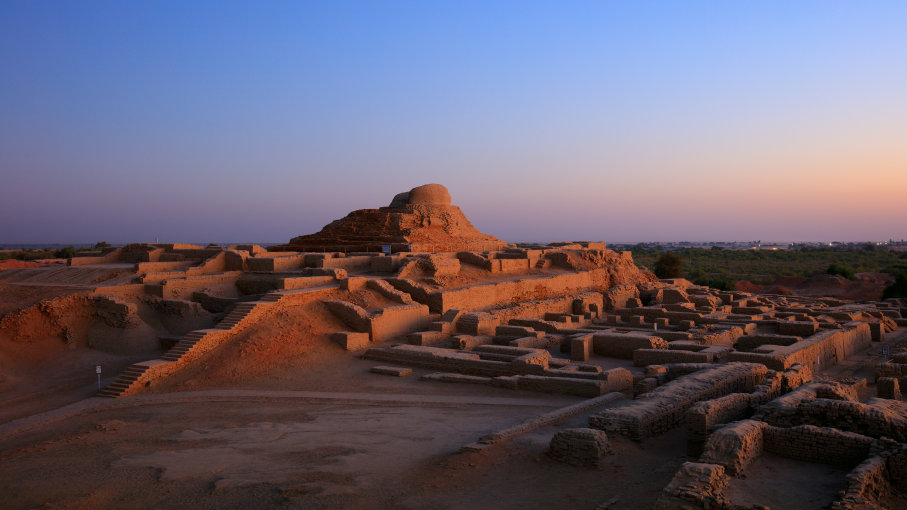 Once a largest metropolis, luxurious lifestyle of that time. Now cries to get attention from authorities. Once indeed a city of beauty now facing merciless wrath of time.

LARKANA, PAKISTAN – Mohenjo Daro, Larkana Sindh Pakistan: 510 kilometers from Karachi and 28 kilometers from Larkana, ruins of Mohenjo Daro exists. Mohenjo Daro stands for “Hill of the Dead Men“. Its a Sindhi word depicts the remains of the land. On the area of almost 300 hectors, this is one of the largest ancient city of human civilization. Civilization existed here nearly in 2600 BC to 1500 BC. The destruction done eventually in 1300 BC.

Archeologist are astonished to figure out its foundation till now. It is the most modern city plan too. It has proper toilets, Swimming pools, Sewerage system, street planning and buildings way ahead of its time. Harappa Civilization is also same, you can call these twin sister. Both cities share fair amount of common facilities. According to a weak assumption, the city had almost 40,000 residents. Multi storied buildings are another marvelous thing in vicinity.

Real name of Mohenjo Daro is “Kukkutarma” that means “City of Cockrel“. The origin of city is still a mystery. There are a lot of rumors but no-one seems true. City has two major parts ” Main Citadel” and “Lower City“. According to Excavation, City’s main source of income was agriculture, trade and cock fighting.

Main citadel was for the authoritative people and priests. It had beautiful gardens and markets. Moreover the lower city was for work class. According to geologists, no weapon or war munitions found till now. So it was presumed to be a peaceful state, making it vulnerable for neighboring threats.

Ruins tells us that city rebuilt for almost 7 times. Floods are one cause of its wrecking as well. It is assumed that after rapid floods people started moving and eventually made small towns nearby. Few says that Aryans Rule are responsible for its destruction. But still there are no strong evidence to this theory. Another reason states that due to climate change, water scarcity increased and it got difficult for people to survive. But we cannot say that any of the reasons are affirmative.

Also See: Things specifically not to do in Ghost Month

By reading complex carvings and signs, it is clear that the civilization has a base of Mesopotamia, Egypt and China. The religions of inhabitants are also a mystery. Few dismantled idols suggest that they may worship the Goddesses. A Goddess name “Mother Goddess” can be seen in Indian Museum.

There are toys of animals and carts as well. They shows their occupation. Ornaments are also found from ruins. One of the most unique and alluring one is “Seven Stranded Necklace”. According to historians, it belonged to the high priest or head of the state.

It is one of those ancient establishments where are no signs of Monarchy. Head of state elected by common people and priest. Maybe the oldest Democratic state in the history of mankind. There are few buildings those are also exemplary. One known as “Great Granary” where they stored all the extra grains of the season. Other one called “Publich Bath House” but it was only for people living in main citadel.

Roads and streets of the town are so well developed and well planned. They have a proper sewerage system that may not clog streets in monsoon and excess water used to directly into Indus river. Mohenjo Daro had Sun baked bricks and burnt wood as a construction material of their houses and other buildings.

It was not discover until 1920. An Indian archeologist, R D Banerjee suspected that there is more in this area. Later, a team of archeologists for example Sir John Marshall and Hassan helped to excavate more in here. It is evident that much of area is still not found and buried under surface. It became UNESCO World Heritage in 1980. In 2014, a minor renovation started due to some political event but stopped immediately and Mohenjo Daro left for demolition.