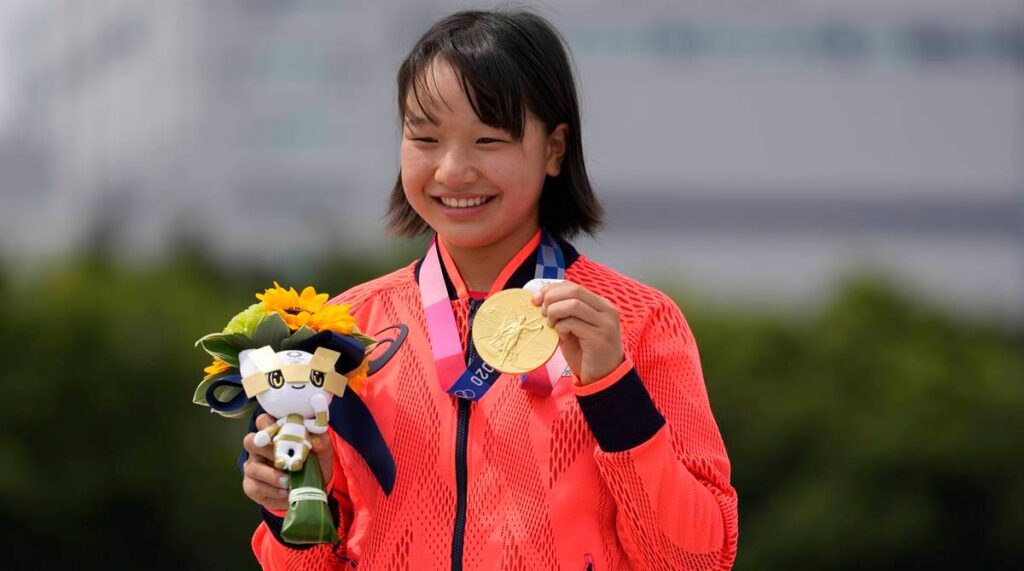 13 year old Skateboarder, Momiji Nishiya secured Olympic gold, in the newly introduced ‘Women’s Street Competition’. Nishiya after the win said, “I welled up in tears because I was beyond happy”.

TOKYO, JAPAN – On Monday 9th August, Japan 13 year old skateboarder Momiji Nishiya went onto win the Gold medal in the women’s skateboarding street competition. Nishiya despite her small age, showed exceptional talent and had a total score of 15.26 points. Winning the Olympic Gold at 13 years and 330 days gave her the title for being the Youngest Gold Medalist in the Tokyo Olympics. This made Nishiya the second youngest athlete to win gold in Olympic history. She is right behind Marjorie Gestring, who at 13 years and 268 days, won gold in diving at the 1936 Olympics.

The Tokyo Olympics were the debut for ‘Women’s Skateboarding Street Competition’ category. Nishiya winning a gold for Japan in the skateboarding category made Japan number one in both male and female skateboarding. Since Yuto Horigome, have already won a gold in men’s skateboarding for Japan.

This was not the first time that Nishiya had won an international competition. She previously won a Silver Medal at the world championship’s in Rome.

How Nishiya won gold for Japan

The women’s skateboarding was a new, however tough category for all the contestants. All the athletes in this category were amazingly talented and gave a tough competition. Nishiya however, stood out since the start of the competition. Nishiya in her fifth and final run, landed all her three final tricks and got big scores. This gave Nishiya a total of 15.26 points thus stepping up to the first position and made her yougest gold medalist.

The contestants that secured the bronze and silver medals were also teenagers. Rayssa Leal from Brazil who is also 13 won the silver medal and Funa Nakayama from Japan won the bronze.

By winning Olympic medals at such small ages, these young girls have set an example and have became an inspiration for every little girl . They have not only won Olympic medals but have also broken the stereotype which states skateboarding as a sports only for men. Most skateboarders at the competition, said that they want to see more women stepping into skateboarding.

‘Alexis Sablone’ from team USA while talking about this said, “It’s taken until now for enough people to pay attention, to get enough eyes on it, to inspire more girls around the world to start skating”.

Rayssa gave an interview after her victory. In the interview she gave out a statement saying, “It’s not right to think, well you have to study, you can’t go skating because skating is for boys” adding to her statement she said “I think skateboarding is for everyone”.

Tokyo Olympics recycled the electronic devices for its Medals