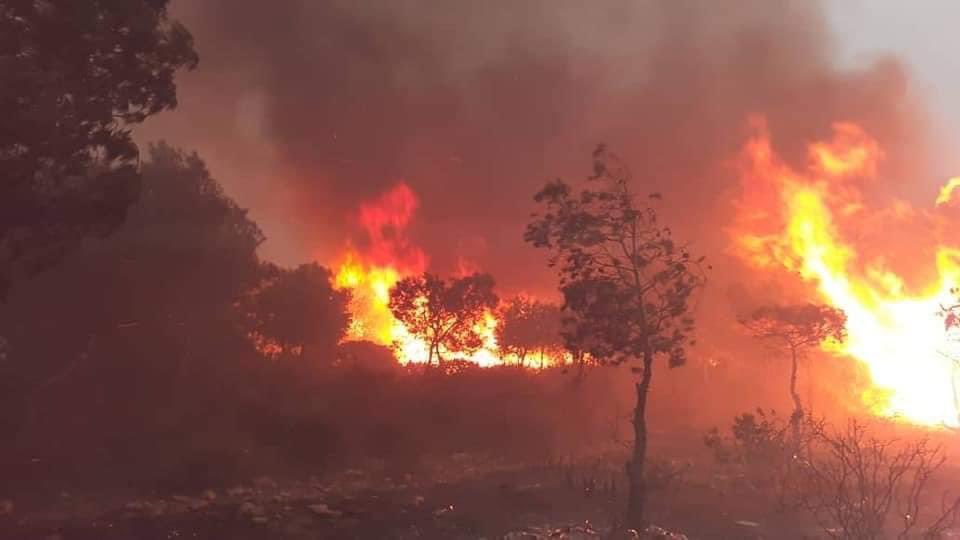 The wildfire started out in the forest of northern Algeria. As of now, it has killed more than 65 people most of whom are soldiers who died rescuing people

ALGERIA – On 9th August 2021, the residents in Tizi Ouzou of Algeria started noticing huge blazes of fire in the northern forest. The fires grew further and started reaching towns and villages to the east of Algiers. The fires since then have burned down houses, crops and buildings. The fire have killed more then 65 people, leaving multiple injured. According to Algerian media, this is the worst wildfire, the country has ever experienced.

The authorities in Algeria are actively working to extinguish the fire. Around 28 soldiers died and 11 are in critical condition while rescuing people out of their homes. The mountainous region of Kabyle is the most affected. Since the area has a tough terrain, with limited water and no proper road links. This made a lot of villagers in the Kabyle region to flee their burning homes.

The forest fire was a result of multiple small fires starting together and mixing up into each other. The fire mainly affected the areas to east of the country’s capital. The fire is mainly causing damage around Kabyle’s Capital of Tizi Ouzou since northern forest surround the place. Other places such as the town of Béjaïa has also been affected by the fire.

People in Kabyle were interviewed about the situation. An old women who witnessed the wildfires said that it looked like the ‘End of the World’. While talking to the press a woman said, “The entire hill was transformed into a giant blaze.” She added to her statement saying, “These burned-down forests. It’s a part of me that is gone, It’s a drama for humanity, for nature. It’s a disaster.”

The wildfire not only affected the northern forest, but also destroyed the livelihood of the local population that survived of selling pine from the forest trees. The fire also destroyed the homes of many living in the mountains. The Algerian Government has announced that Government will compensate those affected.

The Algerian authorities have been working quite hard to extinguish the fire, however the regions unlinked and rough terrain has made it difficult for them. The authorities are now using helicopters filled with water and spraying it down on the forest.

As soon as the wildfire started spreading, authorities started investigating the cause behind it. The Prime Minister talked to the media about the situation. He said that reports from security services reveals that the incident was highly synchronize. Which leads to the belief that this was a criminal act.

The Interior Minister, Kamel Beldjoud also came out and analyzed the situation and blamed arsons to be the reason behind it. While talking about the situation he said, “Thirty fires at the same time in the same region can’t be by chance”. These reports and comments on the wildfire are similar to the ones given by Turkish authorities at the time of wildfires in Turkey.