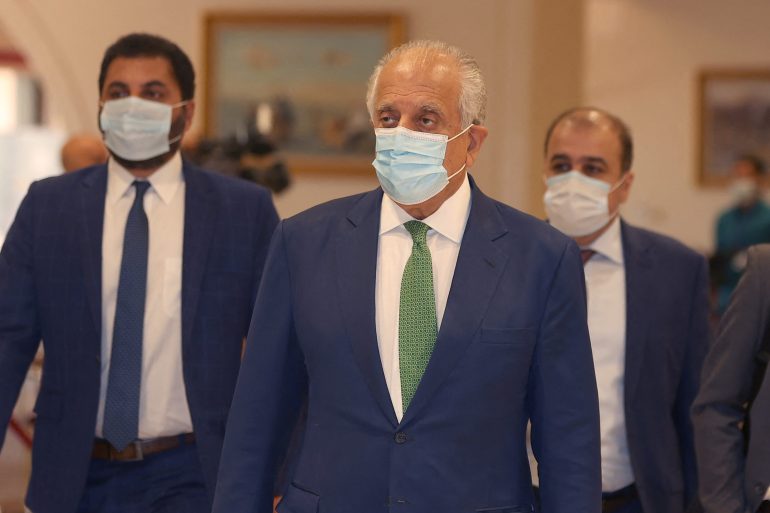 As Taliban continue to capture more Afghan cities. US get in talks with other countries, to formulate a joint response towards Taliban seeking power in Afghanistan.

On Tuesday 10th August, US sent a peace envoy named ‘Zalmay Khalilzad’ to Qatar. This was a warning response towards Taliban’s increasing capture of Afghan cities. The peace envoy stayed in Doha. Where he met several other representatives from a list of countries including US, UK, EU, UN, China, Pakistan and Uzbekistan. All the representatives were together to discuss and formulate a response towards Taliban’s forceful capture of Afghanistan. The Chairman for Afghanistan High Council ‘Dr. Abdullah Abdullah’ was also present with the representatives.

US peace envoy Zalmay Khalilzad is in Doha “to press the Taliban to stop their military offensive and to negotiate a political settlement” said the state department. The state department further said that representatives from different countries and organizations will press for “a reduction of violence and ceasefire and a commitment not to recognize a government imposed by force”.

Zalmay Khalilzad talked about efforts to get in touch with Taliban representatives in their Doha head office. He said that “it was less clear at this hour what role exactly the Taliban will have. They have representatives here in Doha. We’ve not been able to reach them in the last few hours. The spokespeople for the Taliban said earlier this morning they were unclear yet if they were going to be invited.”

Representatives and diplomats from other countries also showed interest in coming up with a joint solution against the Taliban in Afghanistan. Khalilzad while referring to the representatives said that “they also want to come up with some type of joint response to the rapidly deteriorating situation in Afghanistan.”

US forces not increasing support to the Afghan government

The Afghan Taliban which previously restricted to the rural parts of Afghanistan. Has now started to seize multiple cities including important capitals such as Kunduz. Taliban apart from seizing cities have also started freeing prisoners to join them and are attacking more and more cities.

While Taliban are increasing its attacks. The US force which announced to leave on 31 August is limiting its air attacks and support to the Afghan government. A US spokesman regarding this situation said that Washington now sees the fight as one for Afghan political and military leaders to win or lose.

Pentagon spokesman John Kirby at a news conference said that “When we look back, it’s going to come down to leadership and what leadership was demonstrated, or not”. He added a statement saying “It’s their country to defend now. It’s their struggle.”

While Taliban were easily able to capture rural areas without any violence and resistance. The Afghan government did however gave Taliban a tough fight over its capitals. This resulted in Taliban fighters engaging in violent battles in the cities. Taliban during these battles burned down buildings and captured important buildings. During all this havoc, Taliban killed dozens of local Afghanis. This has made a lot of population in Taliban captured towns to leave their homes behind and seek shelter in another city.