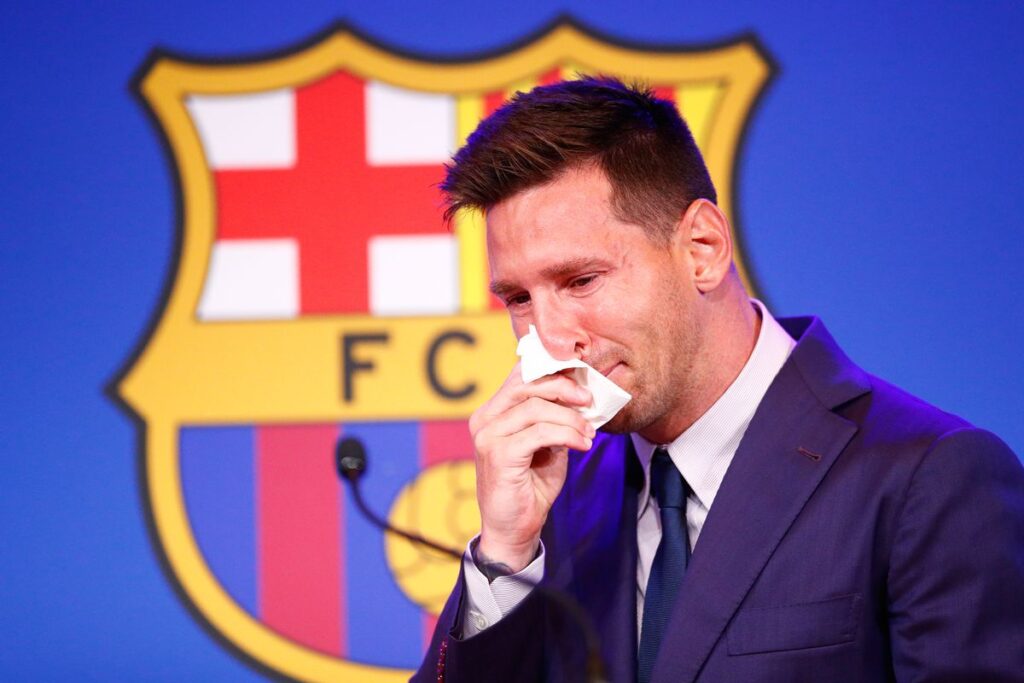 Messi entered the club at age of 13 as a short heighted boy and left as what people knew to be a Magician on field. The beautiful journey ended with tears as the magician bid farewell at the Camp Nou stadium.

On August 5, FC Barcelona released a statement stating that its star player ‘Lionel Messi’ will not continue playing with the club. The statement came out after rumors of Messi leaving the club. It left millions of cules all over the world in tears. The club’s management soon started receiving criticism for this decision. Following the criticism ‘La porta’ the president of Barcelona said that “Lionel Messi wanted to stay and the Club wanted him to stay. But with the La Liga rules it has not been possible.”

Following the conformation a press conference/farewell was took place at the Camp Nou stadium on 9th August. Leo’s family, players and management of the club attended the press conference. In the press conference Messi broke into tears as he headed up to the stage. Later the player said that “This is really difficult for me after so many years, being here my entire life, I’m not ready for this”.

Messi also said that “I never imagined having to say goodbye, because I never thought of it, I never imagined it this way. I imagined it with people in the pitch, with the ‘the last cheers'”. This indeed was a sad moment for the whole footballing world.

Why is Messi not continuing with FC Barcelona?

After 21 years, 778 appearances, 672 goals scored, 305 assists and 35 trophies won for FC Barcelona, who would have thought that the legend would part ways with his home like this. There is still a big cloud of confusion surrounding the whole matter.

It all started as Lionel’s deal with FC Barcelona came to an end. It was decided that as soon as Messi returns to Spain the club would renew the contract at half the salary he previously got, since the club was facing constant loses. However on 5th August, news came out saying that Messi will not be able to continue with the club. This announcement came after a meeting between the players associates and the club’s manager. After the meeting FC Barcelona realized that it would be impossible for them to afford Messi.

These financial challenges faced by the club are a result of financial tensions between La Liga, CVC Capital and Barcelona. La Liga previously agreed to sell 10% of its shares to CVC Capital for 2.7 Billion Euros. La Liga was to distribute 90% of this amount into different clubs for compensation of loss suffered in the pandemic.

Barcelona with its share of the amount was looking forward to sign the Messi deal. During this whole time FC Barcelona did not realize that it had also signed the ‘Super League’ deal, which meant that they had to pay for it.

Now the club’s leadership was stuck between the choice to keep Messi or be a part of the Super League. The club made its decision to stick with the Super League and announced that it cannot afford Leo.

Messi in his press conference was devastated with the situation and said, “We had everything agreed, but at the last minute, it couldn’t happen. This year I wanted to stay and I couldn’t. Last year I didn’t want to stay, and I said it.”

Messi was more than just a player to Barca fans, he was an inspiration and the face of the club. He has been in Barcelona for the longest time and has won 6 Ballon d’Or’s and numerous trophies with the club. Not only fans but players at FC Barcelona saw Messi as an inspiration and an idol. With Messi leaving the club, it would never be the same for Barcelona fans. Fans showed their respect and sadness over Messi leaving Barcelona on different social platforms.