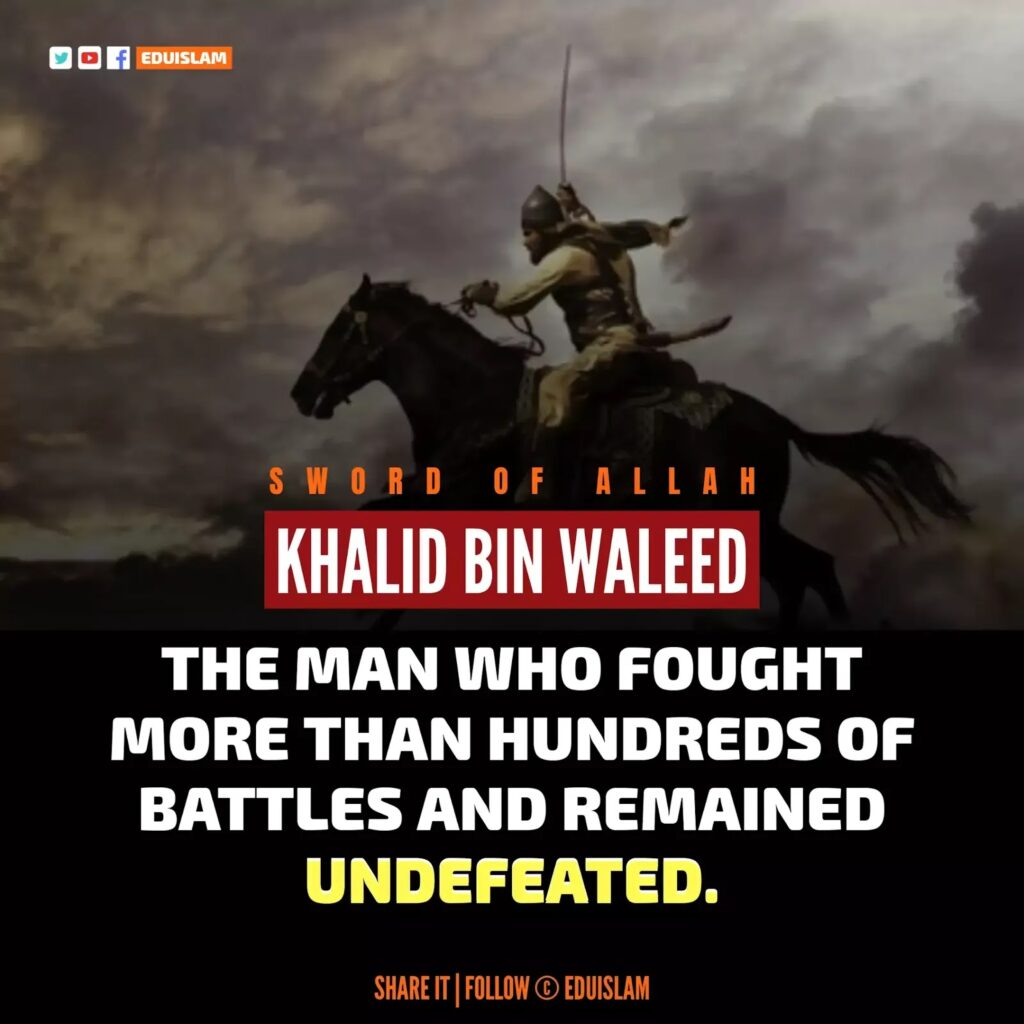 A symbol of bravery and velour, war tactics that one can only think of. A unique combination of ferocious and devotion. A tale of soldier who live for Allah, fought for Allah and died only for Allah.

Who is Khalid Bin Walid (RA)?

Khalid ibn al-Walid ibn al-Mughira al-Makhzumi was a bright son of the very prominent tribe Banu Makhzum, a supporting group of tribe Quraish and leading face of Arab. They are reason that Makkah became a business hub because of their commerce intuitive.

Banu Makhzum known for their bravery and fighting skills all over the Arab. Makhzoom were against of Islam and they fought in Battle of of Badr and Uhud with all strengths. In the battle of Badr, around 50 members of Banu Makhzoom were killed. Then the new star rose named as Khalid Bin Walid.

In Battle of Uhud, Muslims got an early success that made them a bit over confident towards the orders of Mohammad (SAW) to remain on the cliff for a while. Khalid bin Walid used his war instincts and came back after taking a little round of the mountain. When he saw the negligence, he fought valiantly with enemies and got a great success from a failed mission.

After accepting Islam, He made a wow to sacrifice His life for Islam and used his combat skills whenever the nation needed. After Jang e Mutta where he led a small number of Muslim army in most effective way. He won the almost defeated war, he was named as Sayf Ullah (Sword of Allah) by The Prophet Mohammad (SAW).

He was the most brilliant and keen general in the Muslim army. He was the most valiant and antagonistic fighter that time. A great number of Muslims killed in a combat at a certain point, he promised to Allah that he will gather all the enemies. Brought them to the very spot and killed them the exact same way Muslims were died.

In the reign of Abu Bakar Siddique (RA), a lot of forces were picking courage and were planning to attack Muslims. Khalid Bin Walid took charge of army along with the belligerent Sahaba, Hazrat Abu Ubaida bin Jarrah (RA). They stopped the Romans, Persians and Christian forces.

The damage rate of these battles are unbelievable that in one battle the deceased number of Roman forces were around 70,000. While, on the other hand Muslims martyrs were only 400. Historians are still astonished by the fact that with the intellectual placement of force one can avoid such big level of bloodshed.

In the reign of Hazrat Umer bin Khattab (RA) he demoted from the celebrated general to undecorated soldier of army. He took this decision because Muslims started thinking that Khalid made them win any battle and this was getting dangerous for their believe on Allah. Upon asking, He said ,“If I fight for Umer then I cannot fight anymore but if I brawl for the sake of Allah’s mercy then I will serve till my last breath”.

He took part in almost 200 battles in his entire life and never faced defeat in one. He is one of the bravest general in history and often referred as “Military Genius” in the circle. His biggest wish was to die as martyr but Allah had other plans.

His body was full of war wounds and scars which he took as medals he won for Allah. Khalid died in Homs, Damascus in 21 AH. When news reached to Madina, everyone was distress and heartbroken. Hazrat Umer (RA) allowed 3 days official mourn over His Death. His only legacy was swords, spears, bow and arrows and other war weapons. If we say that He was the savior of Islam then it can’t be a lie, his dotting passion was enough for strengthen Islam.