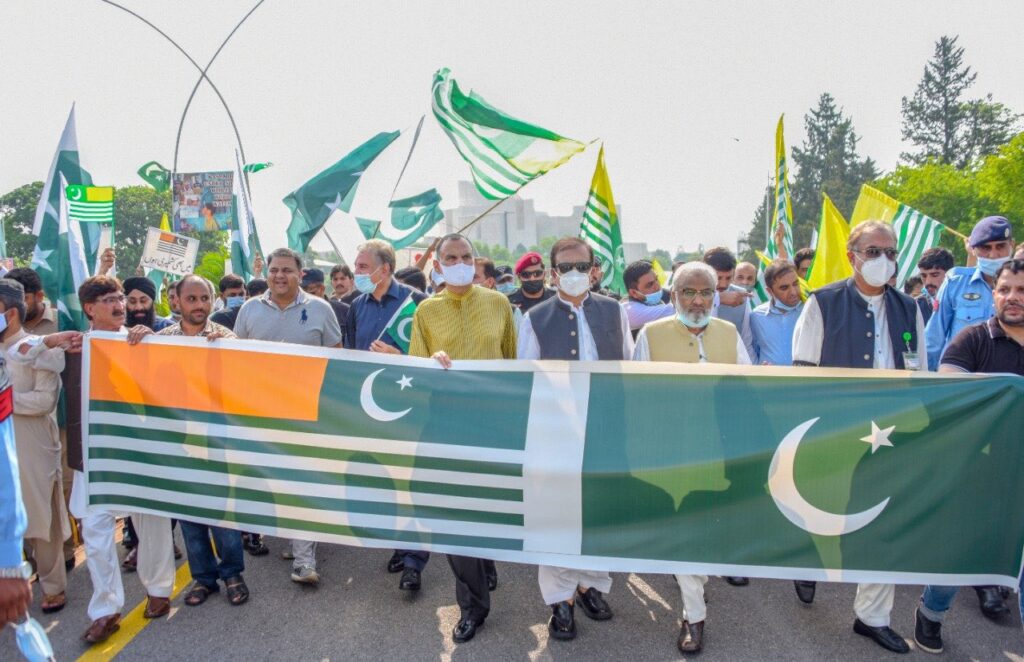 Arif Alvi alongside other PTI leaders rallied outside the Parliament House, Islamabad to condemn India’s tyranny against Kashmir during Youm-e-Istehsal

ISLAMBAD, PAKISTAN – On Thursday 5th August, Pakistan observed a ‘Youm-e-Istehsal’ in order to express its solidarity with Kashmiris, suffering at the hand of Indian military and the Modi government. It was on 5th August 2019 that the Modi government snatched the Indian held state of Kashmir from its autonomy. While also sending in Indian military troops. That to this day have not stopped with their atrocious cruelties towards the Muslims in Kashmir.

People all around Pakistan came out and condemned this act of India. Various events were organized to protest against the cruelty that the residents of Kashmir are facing. Solidarity walks were organized in most cities, with the primary one being held in federal capital Islamabad.

Arif Alvi and other famous PTI members attending the walk surely brought a lot of needed media attention towards it. President Arif Alvi after completing the one mile solidarity walk was in conversation with media channels. The president in his speech highlighted that it has been two years since India has ripped Kashmir off its solidarity. He went on to criticize the use of illegal weapons such as pellet guns against helpless Kashmiri people.

In his speech president Alvi said, “I want to tell my Kashmiri brothers that we are with you”.

He also added that the Prime Minister of Pakistan, Imran Khan fought for the rights of Kashmir in a way that brought out the Kashmir problem in front of the whole world. He later went onto warning India saying that a new and stronger Pakistan is emerging. A Pakistan that will make sure that Kashmir gets its rights.

PM Imran Khan and the COAS Gen. Qamar Jawed Bajwa calling out the oppression in Kashmir

Both Prime minister Imran Khan and the Chief of Army, Gen. Qamar Jawed Bajwa came out on Twitter and spoke about the situation.

Imran Khan made a series of tweets in which he reminded people about the endless oppression the people of Kashmir have been facing. In his tweet Imran Khan said, “Today marks two years since India’s unilateral and illegal actions of 5 Aug 2019 in IIOJK. In these two years, the world has witnessed unprecedented oppression in IIOJK by Indian Occupation forces. It is also witnessing Indian efforts to force demographic change and destroy Kashmiri identity”.

Later in his tweet, he went onto praise the people of Kashmir, saying that they are undaunted in their struggle for self determination. He also assured the people of Kashmir saying that he will continue to raise voice for Kashmir. He said, “Pakistan will continue to fight the Kashmiris’ case with conviction & Insha’Allah Kashmiris’ struggle will succeed.”

He continued his statement in the second tweet, in which he said that a UN resolution of Kashmir dispute and aspiration of Kashmiri people is vital for peace in the region.