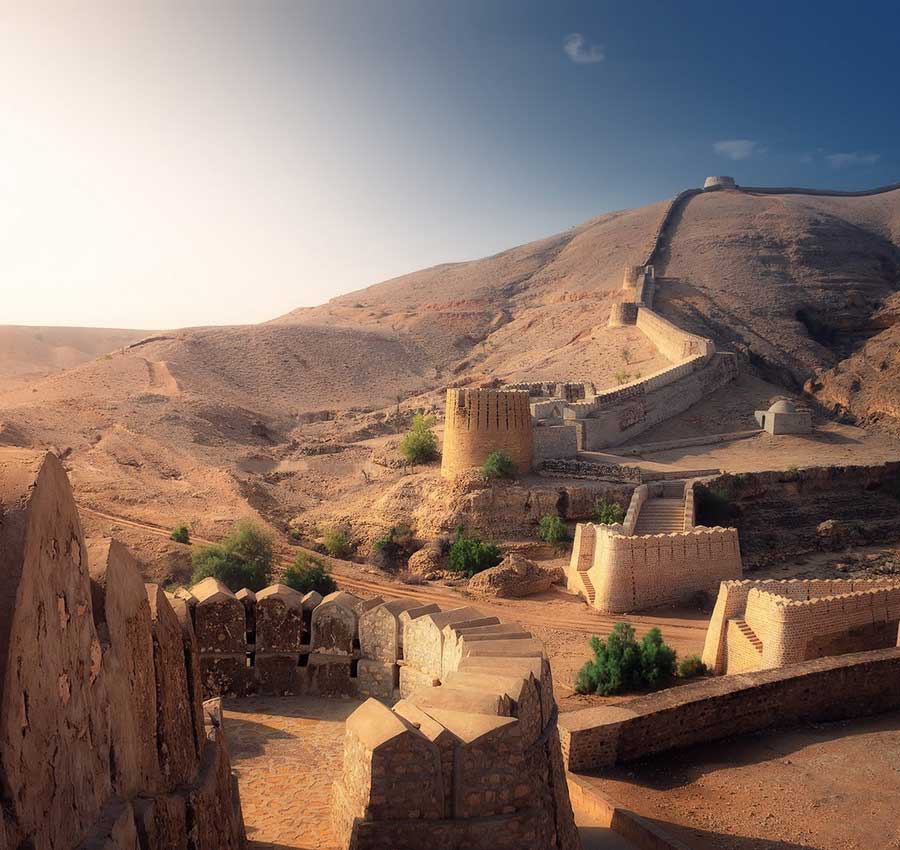 Defense citadel as well as piece of art construction, Ranikot is attracting great number of tourists with its solitary all along.

SANN JAMSHORO, PAKISTAN – Approximate 250 km from Karachi, with hefty drive and walk. You can witness one of the largest and neglected forts in interior Sindh, Ranikot Fort with a great wall of Sindh. It is nearly 1500 to 2000 years old. In 19th century, Mirs of Talpur decided to built this fort.

The main aim for this fort was to protect city from Iranian and Central Asian intruders. They built 32 km long wall around the city for the said purpose. That’s why it is also call The Great Wall of Sindh or Great Wall of Pakistan. The wall consists of Gypsum, lime cut, and sandstone. Nawab Wali Mohammad Khan Leghari supervised its construction in 1891. British took over the fort even before its completion according to records.

Structure of the Fort

In Sindhi, Kot means “Fort”. Ranikot is a big fort with small forts in it. It has four gates besides you can enter through one gate only. Names of gates are Sann Gate, Mohan gate, Amri gate and Pir-Shahi Gate. Names are particularly in accordance of their functions. Sann gate named because it faces sun. Mohan gate, because it connects to Mohen Jo Daro nearby. Amri gate seems replica of ancient Amri estate moreover Pir Shahi gate named after a spiritual personality who put his foot here.

When you approache the fort, you can also trespass the beautiful lake named as Paryun Jo Talao or ponds of fairies. It is a small but alluring lake. It has slippery stones at some places. You have to watch your step while exploring it. It is deep from few sites and parallel in few. The name has a really unique story behind it. This region considers as land of king, saints and fairies. So at night when stars bloom in the sky. Locals claims that they saw fairies and appealing lights here. Nai-Mohan, Pario-jo-Tar, Nai-Rani and Nai-Sun are the names of same pond running inside the fort.

It is under tentative UNESCO national heritage building since 1993. But few steps are taken to preserve this hidden marvel. A small project started in 2005 but due to negligence and corruption it ended in 2006. Around the fort you can enjoy beautiful landscapes and scenic beauty. Along with strong foundation you can see goats, foxes, monitors, jackals, fishes and even snakes. Now a million dollar question arises, Is it safe to visit Ranikot??

Answer to this is mix. Police is nowhere here to patrol or security. You can see foreigners and local tourists as well. But safely to say it is a secure place. If you want a getaway for a day, you can visit Ranikot and come back in a day easily.