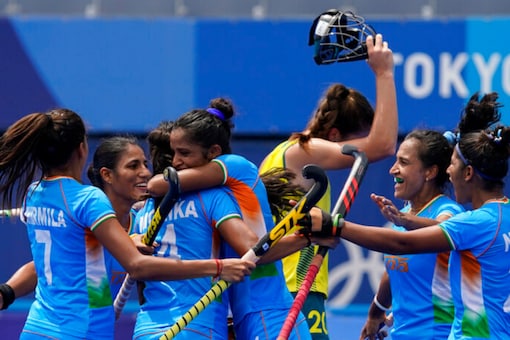 On Monday 2nd August, the Indian women’s hockey team qualified for the Olympic semifinals. The team did so by beating Australia 1-0 in the quarter finals. Gurjit Kaur scored the goal from a penalty corner in the second quarter. With Qualification in the semifinals. The Indian women’s hockey team has created history since this is the first time that it has survived knock offs in the Olympics.

The first quarter: Aggressive attacks and a missed shot

The match started off with little hopes for India to win. This is because the Australian team was ranked at the number two position in world ranking and thus was considered a beastly opponent. However, the Indian women’s hockey team gave them a strong and brave competition throughout the game.

The match started with the Aussies showing a much stronger competition than the Indian team. Australian team’s ‘Amrosia Malone’ took the first shot at the goal. However, Indian goal keeper Savita successfully managed to stop it. Soon after Savita’s save, the Indian team started adapting an aggressive gameplay. The aggressive attacks by the Indian team made the Australian defenders panic.

This offered India a lot of chances to strike at the goal, however the Aussies managed to not conceive a goal in the first quarter. The game however got interesting at the ninth minute, since it picked up a lot of action. Vandana Katariya took a strong shot towards the goal, however it got deflected by Rani Rampal and hit the back post. Soon afterwards Broke Peris from the Australian team hit a shot that missed the goal from quite a distance.

The second quarter: The lucky penalty corner and the excellent defense by Indian women’s team

The beginning of the second quarter was not very lucky for India. The Australian team had them pressed hard. Things worsened when the Aussies secured a penalty corner against the Indian team at the 20th minute. However, India excellently defended the penalty corner thus bringing up the hopes of Indian fans once again.

Soon after the Australian team’s penalty corner, the Indian team secured their first one. Gurjit Kaur stepped up for it and did a low flick and scored the goal thus bringing Australia down to 1-0.

After the goal, the pressure on the Aussies increased. The team started playing much more aggressive and also got three penalty corners. The penalty corners gave Australian team a good chance of scoring, however India’s defense successfully stopped the Aussies from scoring.

The last 8 minutes of the game were pretty intense for India, the ball mostly stayed in the Indian half. Moreover, Aussies got around four penalty corners in the last 8 minutes, which were all successfully stopped by the Indian defense that stood like boulders in the Aussies way.

The match ended with the 1-0 score and the Indian team jumped around in celebration. The win made India qualify to the group A thus bringing it in the semifinals.

How strong is India’s position in the semifinals?

With the exceptional win against Australia in the playoffs, the Indian team is just two step away from the gold medal and that is the semifinals and the finals. There are a total of 4 teams in the semifinals. India will now be facing Argentina in the semifinals whereas the other semifinal is between Netherlands and Britain.

Both the Indian and Argentinian teams have performed exceptionally well in the tournament. Argentina’s win in the knockoff against Germany was also quite shocking since Germany won bronze in the Rio Olympics. On the other hand, India’s win against Australia was nothing less than a surprise.

Argentina has won four out of its six matches in the Olympics whereas India has won three, this predicts that Argentina is more likely to win. However, India’s team is in excellent form and has proved its self against Australia.