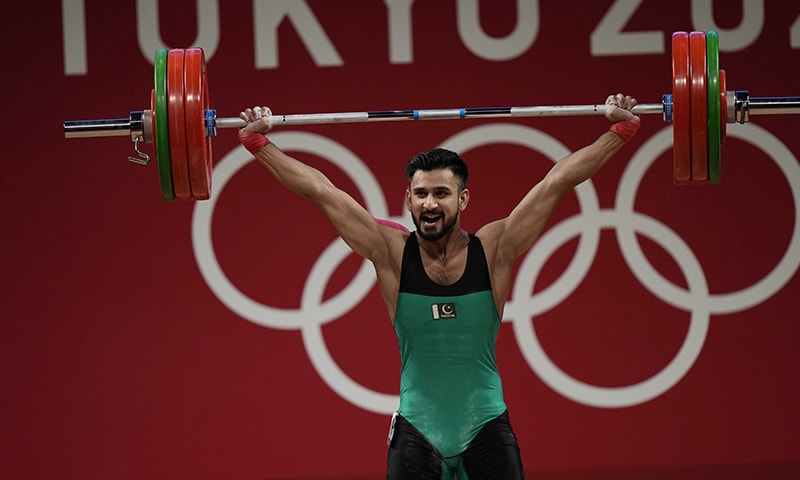 Trained in a makeshift gym, Weightlifter ”Talha Talib” becomes the only Weightlifter from Pakistan since 1976 to make a cut into Olympics Weightlifting category.

TOKYO, JAPAN – On Sunday 25th of July, Pakistan’s 21-year-old, Talha Talib secured 5th position in the Weightlifting category of Olympics 2021. Talha’s selection into the Olympics was surely a proud moment for the nation. The 2021 Olympics was a debut for Talha.

It was the first time in 40 years that a Weightlifter from Pakistan was chosen for the weight lifting category. Talha took part into the 67 kg Category and held the gold medal up until the last round where he sadly lost by a difference of just 2 points.

In the snatch lift round Talha Talib managed to lift 150 kgs. Later during the clean and jerk round, Talha attempted to lift 166 kgs but fell down. This made a lot of people worried about him getting an injury however Talha soon stood up and so did the hopes of Pakistan. Talha didn’t lose hope and in his final attempt lifted 170kgs of weight with a wide smile on his face. This gave Talha Talib a total of 320kgs.

How the last round pushed Talha Talib to the 5th spot

Talha with 320 kgs, was on the number 1 spot, up until Korea’s Han Mayekon lifted 174kgs surpassing Talha’s total. Weight lifters from Colombia and Italy went onto lifting 180 and 177 kgs pushing Talha onto the 4th position. Talha settled on the 5th position when China’s Chen Lijun lifted 187 kgs and made a record breaking total lift of 332kgs. Talha Talib lost the Bronze medal by a mere difference of just 2 points.

While Talha Talib may have not won a medal. He sure did win the hearts of millions of Pakistanis. It was Talha’s exceptional story and struggle that allowed him to make a place in people’s hearts.

Talha is born and raised in the populous city of Gujranwala, with no proper training available for weightlifters. Since years Talha have trained in his own makeshift gym with his father being his trainer. Talha Talib despite all challenges went onto make a mark.

After the competition Talha Talib’s story went viral. The athlete received a huge amount of love from all over the country. Famous personalities including cricketers and journalist all went onto Twitter and praised the young champion.

Sports reporter, Faizan Lakhani in his tweet praised Talha Talib and also criticized PSB and other sport authorities in Pakistan.

While Talha Talib’s story of struggles and success surely made people discover a new hero, it also highlighted the mistreatment of athletes that Pakistani authorities have been doing. Athletes from all over the country spoke up on the discrimination they faced and multiple authorities were criticized.

Talha himself in an interview said that the Pakistan Sports Board have not organized a camp for weightlifters for past three years. Talha’s story is surely a ray of hope for many athletes that have been suffering at the hands of corrupt authorities.

Pakistan gave the ODI Series to England on a Silver Plate