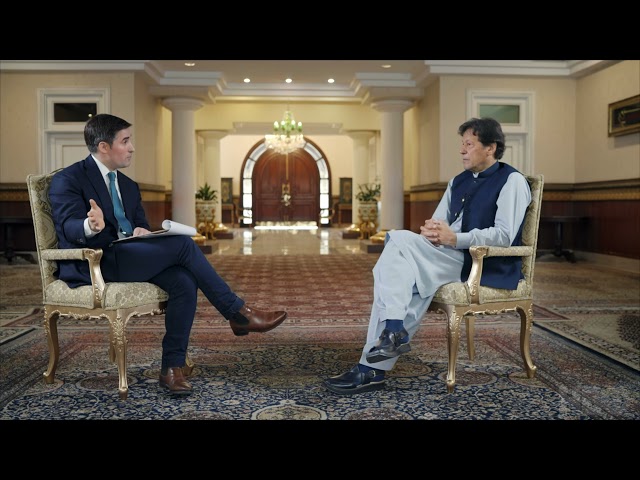 Imran Khan’s Journey from ” Absolutely Not ” to ”Robots” took uneventful turns in his recent interview to HBO.

Pakistan Prime Minister, Imran Khan recently gave an interview to Axios HBO and rasied many eye brows with his blunt and controversial answers. “Absolutely not. There is no way we are going to allow any bases, any sort of action from Pakistani territory into Afghanistan.’’ PM while addressing US troops entry in Pakistan.

Imran Khan also made a statement about the situation of sexual harassment, ‘’If a woman is wearing very few clothes, it will have an impact on men,” the prime minister responded. “Unless they’re robots. I mean, it’s common sense.’’ The statement stirred a rage and agitation among the audience and brought a lot of criticism for the prime minister.

KARACHI, PAKISTAN – Australian journalist named ‘Jonathan Swan’ conducted an interview of the PM Imran khan, the interview was aired on 3pm Pakistani time on 21st June. Questions and answers were exchanged on various topics which include Pak-China relationships, the COVID 19 virus and Uyghur Muslims. apart from that, questions about the allowance of US military bases in the Afghanistan through  Pakistan were asked, to which the PM responded,

‘’ Absolutely not.’’ Imran Khan further added, ‘’ There is no way we are going to allow any bases, any sort of action from Pakistani territory into Afghanistan.’’ The statement won the hearts of many Pakistani’s.

The interview was aired and the clip of PM Imran khan saying ‘’Absolutely Not’’ to Jonathan, HBO went viral, resulting in people applauding him. All things were good for the PM up until a small part of the interview in which sexual harassment and rape is being discussed went viral, during that part of the video Jonathan asked Imran Khan about his opinion of clothes of a women having a connection to rape, to this the PM replied that he does think that if a women wears ‘very few’ clothes, it would absolutely impact a man unless he is a robot,

‘’If a woman is wearing very few clothes, it will have an impact on men,” the prime minister. “Unless they’re robots. I mean, it’s common sense.’’

This particular statement the prime minister sparked an outrage amongst all social media channels in Pakistan.

The outrage resulted in people using all social channels to bash out on the prime minister for such remarks, most people said that rape is about power and not about clothes and demanded the prime minister to publicly apologize for his statements, on the other hand a large percentage of the population reached out in support of Imran Khan and the statements that he made, saying that he was absolutely correct thus resulting in long threads of arguments and heated discussion’s all over the country’s social media. This divide based on the difference of opinion is not something that we saw for the first time, previous instances like these have also divided the population of Pakistan.

The statement about women’s clothes and men not being robots went viral and not the discussion surrounding it, this made many of the PM supporters believe that it was done on purpose as right after this statement the PM said that he thinks that this statement can differ from society to society and since Pakistan is a society which have not seen women wearing short clothes thus he believes that this statement is true for Pakistan, furthermore the PM used the word ‘’Cultural Imperialism’’ to describe the situation which means the imposition of a culture on a different one.

After receiving a big amount of criticism on the Imran Khan and his political party decided to address the matter and thus released the whole length interview on their official YouTube channel which in order to make people see the complete picture, moreover the Pakistani Government also asked HBO for an explanation as to why they didn’t release the full length interview.

Once released the full length interview did help light out the fire to some extent and a lot of people that previously criticized the PM stood in his support, apart from that people also said that the PM spoke up against things that most people don’t, which is why he should be appreciated.

The internet seems to be divided between opinions, you might also want to include your thoughts about the matter in the comment section below.