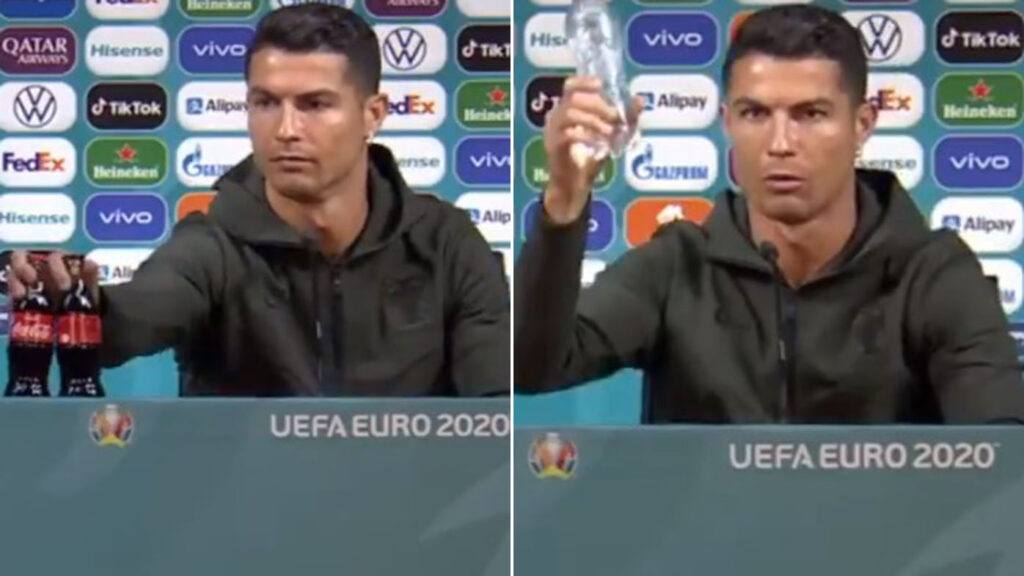 BUDAPEST, HUNGRY – One of the most popular Portuguese footballer, Cristiano Ronaldo, did a small stunt during Portugal’s press conference before Euro 2020 opener on Monday. This seemingly small stunt cost the Official Sponsor of the tournament, Coca Cola, a $4 billion loss in market value.

Cristiano Ronaldo made his sentiments clear about the soft drinks as he removed the Coca Cola bottles from the table and replaced them with water bottle, waived it before the media and said in Portuguese, ‘’Agua’’ which means drink water.

Perhaps, the health tip from a fittest athlete ‘ Cristiano Ronaldo ‘ brought a rather huge financial weight. Coca Cola faced a tumble of $4 Billion, from $242bn to $238bn in the market value as the world famous footballer removed the bottles. Coca-Cola’s share price dropped from $56.10 to $55.22 almost immediately, a 1.6% dip.

A statement from the brand, Coca Cola!

A spokesperson of Coca Cola issued a statement in response to the stunt on Tuesday,

‘’Everyone is entitled to their drink preferences” and everyone has different “tastes and needs’’. He further added, ‘Players are offered water, alongside Coca-Cola and Coca-Cola Zero Sugar, on arrival at our press conferences.”