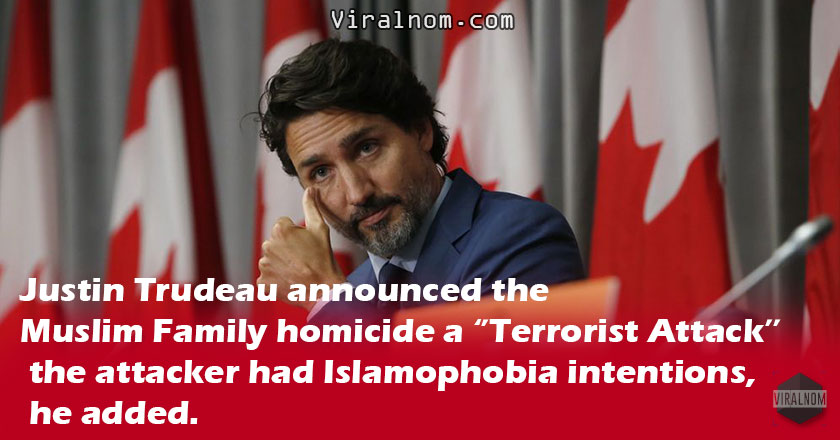 TORONTO, CANADA – Canadian Prime Minister, Justin Trudeau, on Wednesday, presented in the Canadian House of Commons and shed light on the recent incident of murder of a Muslim family by a truck driver. The Prime Minister condemned the onslaught and labelled it as a ‘’Terrorist Attack’’.

‘’If anyone thinks racism and hatred don’t exist in this country, I ask to them this, how do we explain such violence to that child in hospital. How do we look in the eyes of the families and say Islamophobia isn’t real’’, The Prime Minister.

“Their lives were taken in a brutal, cowardly, and brazen act of violence,” the Prime Minister said before the House of Commons. “This killing was no accident. This was a terrorist attack motivated by hatred in the heart of one in our community.”

The family of five, were deliberately crushed by a black pickup truck on a sidewalk while walking. The police stated the violence was motivated with hatred. The husband and wife, their teenage daughter and husband’s mother died on scene while their nine years old son was severely injured and immediately hospitalized.

Although, the twenty years old suspect, Nathaniel Veltman got arrested four miles away from the intersection where the incident occurred and is charged with four counts of first-degree murder and one count of attempted murder, many Muslim leaders are seeking courts to deem the case under the prosecution of terrorist attack.

Mr. Trudeau addressed parliament in the wake of the attack, describing a “brutal, cowardly, and brazen act of violence”.

The perpetrator “does not represent us as Canadians”, the prime minister said, but he dismissed the notion that this type of violence is not “Canadian” – by Canada’s opposition leaders.

“We need to look this in the face – this hate does exist in our country,” Mr. Trudeau said.

“This is happening here in Canada and it has to stop,” he said. “We must not become desensitized to this violence. We must not accept this as normal. Every time we witness such hate, we must call it out.”

“To the loved ones of those who were terrorized by yesterday’s act of hatred, we are here for you. We are also here for the child who remains in hospital — our hearts go out to you, and you will be in our thoughts as you recover,” Trudeau said.

“To the Muslim community in London and to Muslims across the country, know that we stand with you. Islamophobia has no place in any of our communities. This hate is insidious and despicable — and it must stop,” he added.