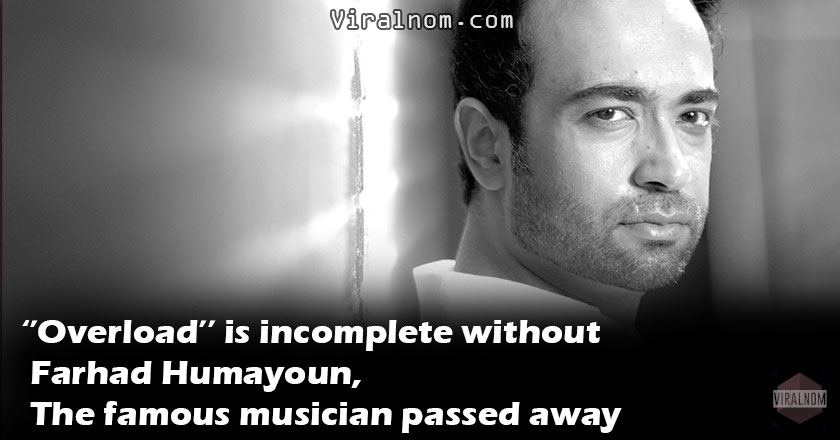 The famous musician/singer and the front man of drum jam band ‘’Overload’’ Farhad Humayoun passed away on Tuesday. The news of his death was announced on the artist’s Facebook official page.

‘’The magnificent Farhad Humayun & Overload left us for the stars this morning. Stoic in the face of challenges, uncompromising in his values, generous to a fault, witty as hell! Fadi was far too ahead of his time, both in spirit and art. He would want us to celebrate his life, so we request his family, friends and fans to honour him and say a prayer for him today,’’ post read.

The status further added, ‘’ We can almost hear him say these words by David Bowie: “I don’t know where I’m going from here, but I promise it won’t be boring”.
Godspeed our gentle giant and thank you for creating a Riot!’’

The cause of death has not been revealed yet by the social circle or the family. However, it was revealed by the musician himself that he had undergone a brain surgery in 2018.

The magnificent maestro of art joined the industry as an underground musician. He later formed the band ‘’Overload’’ in 2003. Also, apart playing drums for former bands such as Co-Ven and Mindriot, Farhad was also a singer and music composer.

Many artists and musicians from the Pakistan Music industry are entitling the demise of the singer as a big loss of music fraternity.
Female Vocalist/Singer, Meesha Shafi took to the twitter and paid her condolences to her friend, late Farhad Humayoun. She shared her favourite song of Farhad Humayoun in his memory.

RIP Fadi
Thinking only of the good times we shared.

My career in music began with Overload.
We were at loggerheads at times but made some undeniably good music on the way. This is just one of those brilliant songs. Sharing this in your memory.

Drama Actor, Adnan Siddiqui said he was shocked to hear the news of the demise of the famous artist.

Shook to know about the passing away of #FarhadHumayun. A young, talented life snatched by the cruel hands of fate way too soon. Life is so fragile…May Allah grant him higher place in Jannah . Ameen 🙏🏽 pic.twitter.com/evWrlgC4ys

Close friend of the late singer, Abbas Ali Khan shared his and Farhad’s picture and grieved on social media.

Fashion Icon, HSY couldn’t stop himself from grieving and said that Farhad’s music will always live in all hearts forever.

Famous VJ, Anoushey Ashraf posted on Instagram about Farhad, ‘’ Thank you for always opening your heart and making me see the upside of life forever ready to give advice and courage to a friend who needed it carrying the burden of that dreadful tumour yourself but taking it so gracefully in your stride.’’

The musician was celebrated and loved among the Pakistanis, especially the young millennials who grew up oscillating on his music. His loyal fan following is grieving his death in all over the country.

May the soul rests in peace!