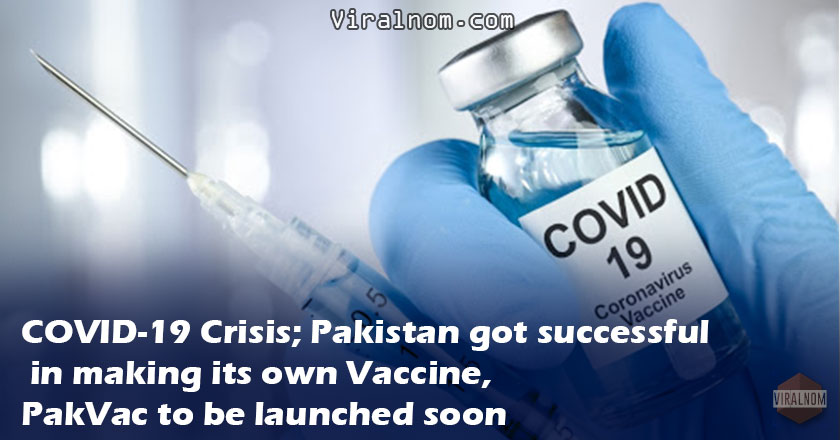 The vaccine has gone through rigorous testing. It has been made sure that pakvac vaccine will be effective for general populace. Negating the common side-effects-conspiracy theories circulating among the community via social and digital media. The first batch will include up to 124, 000 jabs of the vaccine.

The vaccine will be officially approved after final testing. After that production of almost 3 Million doses per month will be made possible. Meanwhile Pakistan Regulatory and Health Authority Body are trying to achieve the goal of vaccinating 18.7 Million people around June.

Looking at the current situation, more than 860, 000 people have been infected from COVID-19 and the numbers already rising and almost 19,000 has been died from the disease. Pakistan is already on high-alert. The availability of vaccine and the great number of inoculation of the population against the virus is one of the most efficient ways to defeat the disease.

The vaccination drive of Pakistan is relatively way slower than the other south Asian countries. Around 3.32 Million have been vaccinated within the 216 Million yet which makes only 0.8% of the total population. While the global rate is 16.44% as per 100 people while we stand at 1.53%. At this rate, it will take a decade or more to vaccinate every citizen of Pakistan, Dr. Abdul Ghafoor Shoro (Pakistan Medical Association).

The medical officials have confirmed that the limited import and availability of the vaccine is most of the major contributors in the low rate of vaccination. Moreover, widespread hesitancy of the citizens towards the vaccination process has also been reported due to negative publicity. Conspiracy theories have been advertised regarding certain side effects of the vaccines within the people via social media and even religious sermons in mosques. That’s why, people in general, are scared to get their shots due to lack of awareness and false projection.

Even Health care workers are reluctant to get their jabs against the COVID-19 virus.

Vaccine Registration in all over the country

With the rising rate of infections encounter every day, the registration rate of vaccination in all over Pakistan has also picked its pace, Asad Umar. Almost 164,000 had been vaccinated in a day and 200,000 the following day.

In a meantime, new centers have been developed to cater 30,000 per day in Sindh. These centers encourage individuals of age 18 and above to get their shots. The centers also equipped with a portable assistance, additionally inoculating the individuals who are incapacitated and individuals with disabilities.

Government of Punjab is also focusing on opening more new centers to offer vaccination to almost 80,000 per day as Punjab is the most peopled province of Pakistan.

The process of vaccination will pick up the pace with these new initiatives, the officials will not have to worry about the enough supply of the pakvac vaccine since the in-house production, and every individual of Pakistan will be benefited eventually in shorter time.