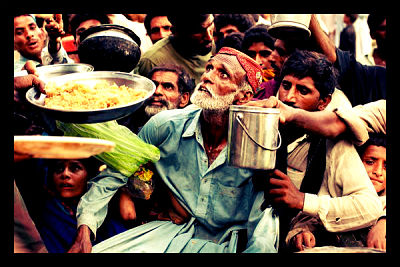 After the recent floods, hundreds of people were dislocated from their houses, the property was damaged and whatnot. But one thing that is so severe can become a nightmare in the future. That is the Upcoming Food Crisis Emergency in the country. The situation will get better or it become worst…… Let’s discuss

Pakistan has been pummeled by three consecutive years of flooding resulting in destroyed crops and forced evacuations. Coupled with tribal violence this situation has prompted the UN to declare Pakistan in a state of Food Crisis Emergency. However, aid may be slow in coming. This food crisis may become the biggest problem in the coming years as the grand drought is approaching the world.

Extreme floods have wiped out over 800,000 hectares of farmland, and damaged about 80-90% of crops. These include crops that are critical to Pakistan’s food supply chain. Key export items, including rice, wheat, and cotton, also risk future shortages as the scale of damage spreads to key agricultural belts. That includes Pakistan’s southernmost Sindh Province, where an estimated 90% of crops have been ruined. Sindh is responsible for producing half of the country’s food.

The resulting constraints on Pakistan’s agricultural sector are enough to lift double-digit inflation to new highs if supply shortages stretch long-term and future floods exacerbate the damage. There is also a growing likelihood that the government will increase its dependence on agriculture-related imports to plug near-term shortfalls.

But even once the current crisis passes, the outlook is grim for my country. In the World Bank’s 2021 Climate Risk Country Profile, projections for Pakistan over the next 10 years suggest “yield declines in many key food and cash crops, including cotton, wheat, sugarcane, maize, and rice”.

Pakistani Prime Minister Shahbaz Sharif recently warned that his country needs “an infinite amount of funding” to support flood relief efforts. Torrential rains and heavy flooding have killed more than 1,550 people and displaced millions. Compounding the challenge are Pakistan’s intensifying food and health crises, as flood-borne diseases surge and nearly two-thirds of the country’s food basket has been destroyed.

The government must ensure the funds it receives are used properly, both to address the immediate challenges spawned by the floods and to rebuild intelligently for when we are inevitably hit by the next large climate event. Pakistan is at a crossroads. It does not have to drown or go hungry.