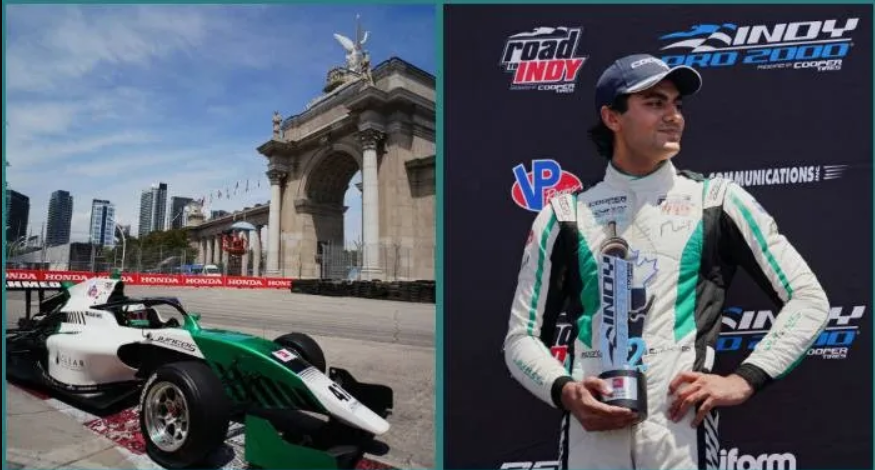 22-year-old, Enaam Ahmed, won 2nd place at Toronto Grand Prix. He becomes the first Pakistani to ever stand on a podium of the Grand Prix. Enaam is determined to win the series.

Enaam Ahmed is Pakistan’s most thrilling racing car driver. He become second on the podium at the Streets of Toronto circuit of the IndyPro 2000 races on July 16, 2022. Enaam Ahmed became the first Pakistani to stand on the podium at the Toronto Grand Prix. He finished third in races 13 and 14. He is determined to win the championship. The outlaw racer will go to any length to make Pakistan proud via his efforts, even hanging the country’s flag on his car.

Taking to Instagram, he wrote: “Race 1 was great with finishing 2nd! I didn’t finish Race 2 unfortunately. Overall a really good weekend showing how strong our pace was in every session. I’m looking forward to fighting for the rest of the year”.

Enaam earlier finished fourth in Mid Ohio despite some difficulties and third at Road America. Enaam Ahmed’s season has clearly been a success this season. As he races to the finish line with his sights set on the prize. However, Enaam, the lone representation of Pakistan on the race track, proudly displays his affection for the green and white flag. He is one of the few Asian-born drivers in professional racing.

Enaam while talking to press said, “I was the quickest on track in the race but unfortunately, it’s really difficult to pass because it’s a street circuit, but really happy to start the season like this, and also the team gave me a really good car which I’m really happy about and we kept in one piece.”

Enaam’s parents live in Central London. Although he splits his time between the UK and the US. He has won races all over the world, from Europe to Japan and New Zealand. He expressed his appreciation for his Pakistani followers by announcing that he will visit Pakistan soon and try to promote the game in the nation.