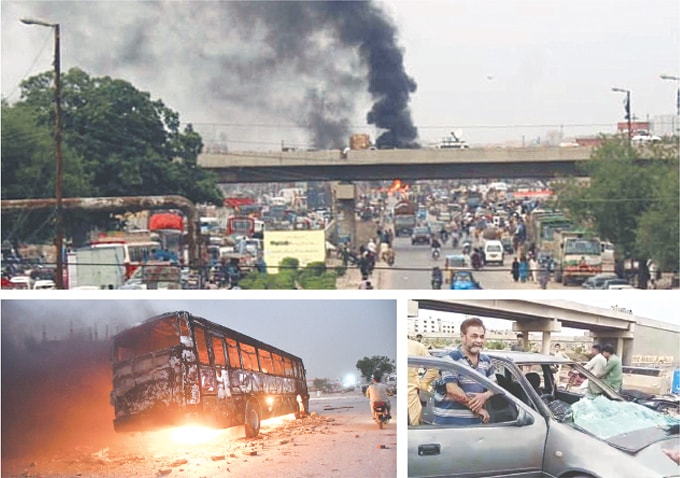 On Thursday evening, hundreds of people gathered at Al-Asif Square in Sohrab Goth in protest of the recent killing of a man in Hyderabad, which was followed by numerous vehicle fires and looting.

During the protest on the highway, several incidents of shooting and arson occurred in which a bus was set on fire and some vehicles were ransacked, according to witnesses and police officials.

Additionally, Sindh police requested to provide a detailed report about the killing and subsequent incidents in different parts of province. In order to bring the culprits to justice, he instructed them to investigate all incidents professionally.

A vehicle was also set on fire by protestors at Al Asif Square in addition to attacking police pickets. A bus and two motorcycles were also set on fire. To control the situation, Rangers and police were deployed in large numbers.

During their dinner at Super Salateen Hotel, Bilal Kaka and his four friends got into an argument with waiter. After approaching the owner with the complaint, the situation worsened, leading to a fight.

The suspect Shah Sarwar was presented to a judicial magistrate in Hyderabad on Friday. On judicial remand, the suspect was sent to jail for seven days.

There were also clashes in Hyderabad, Sakrand, Naushero Feroz, Larkana, and other cities in Sindh as a result of the killing. To avoid communal clashes, political parties have called for caution over the incident.

In post-mortem report, Bilal Kaka was found dead after being hit with an iron rod on head, back, and chest.