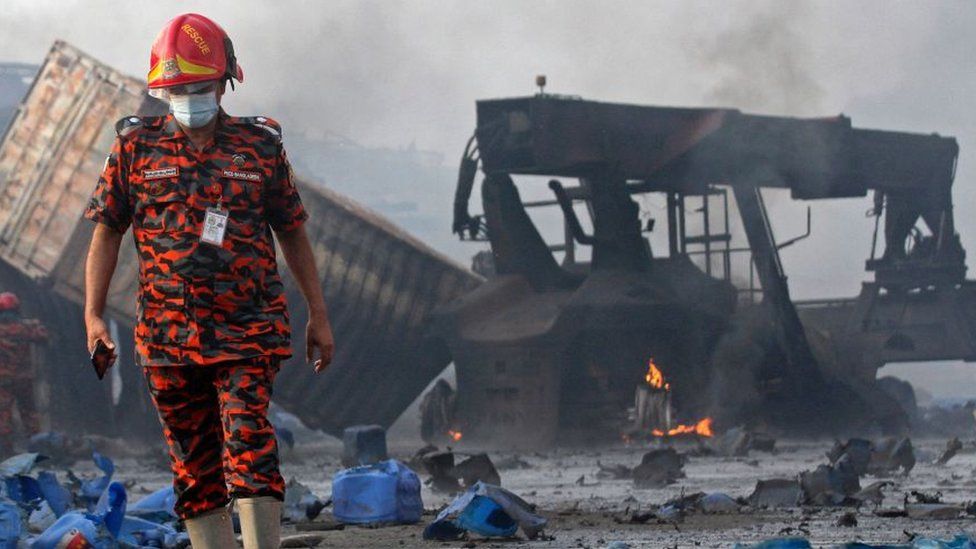 DHAKA, BANGLADESH: An explosion broke out in the container depot in the Sitakunda area, Bangladesh. This Chittagong incident left hundreds of people suffering and unemployed. However, Police is trying to figure out the real reason behind this horrendous blast.

A massive fire at a container depot in southeastern Bangladesh has killed at least 49 people and injured over 450, according to officials. The fire at the depot in the Sitakunda area has left about 300 people injured. Authorities fear the death count may climb. This Chittagong incident left a lot of questions about human rights and work space safety.

According to police officer Nurul Alam, posted at Chittagong Medical College Hospital’s police outpost, preliminary probe has indicated that the fire broke out due to chemical reaction. Local media reported that that fire spread following an explosion. The police officer said that while the fire broke out around 9 pm and the explosion occurred around midnight. Following the blast, the fire spread rapidly.

The inferno at the BM Inland Container Depot, a Dutch-Bangladesh joint venture. Broke out around midnight Saturday following explosions in a container full of chemicals. The cause of the fire could not be immediately determined. The depot is located near the country’s main Chittagong Seaport, 216 kilometers (134 miles) southeast of the capital, Dhaka. Moreover, At least nine firefighters were among the dead.

As those people battled with the blaze, a number of containers holding chemicals exploded, enveloping many of the rescuers in flames and throwing debris and people into the air.

“The explosion just threw me some 10 metres from where I was standing. My hands and legs are burnt,” Tofael Ahmed told.

Bangladesh is a country where manpower is cheap and reliable. But there are no proper precautions for labor safety and protection. Moreover, most of the people who died in this horrific incident. They do not have proper shoes that can save their skin from chemical reactions. They work in flip flops or slippers in extremely hazardous conditions. However, After the Chittagong incident, authorities must take care of their poor workers as well.