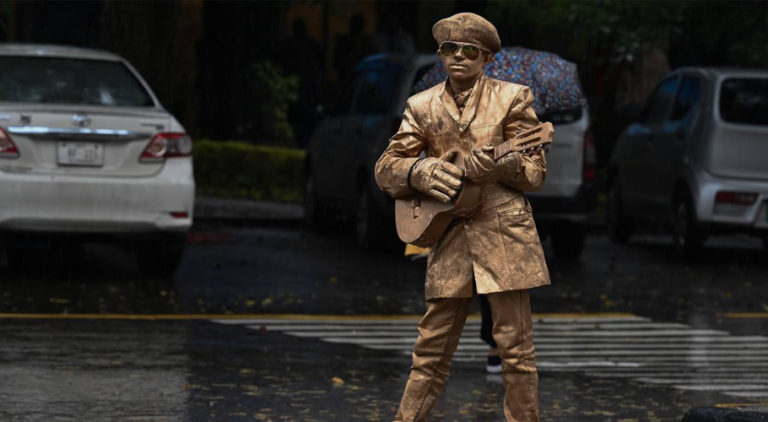 18 years old talent is performing his art in Islamabad. One of its kind Gold attempts to entertain people. Muhammad Ahsan AKA Golden boy is making headlines with his unique and eccentric moves.

ISLAMABAD, PAKISTAN: Life is unpredictable. It gives you various chances to prove yourself in the most amazing and eccentric ways. Same incident happens with the 18 years old boy Muhammad Ahsan. A boy full of ambitions and dreams came to Islamabad to get a decent job all the way from Karachi. However, with no formal or professional degree in hand, he failed to get one. After multiple attempts he decided to go back and search for something else. Until one day he decides to become a first Golden Live Statue of Pakistan also known as Golden Man of Islamabad.

One day he was watching TikTok and he saw some Indian live statue in some video. This idea strikes him and he choose this path to show his talent and skills. He painted himself in bronze golden paint, wore golden suit, paired that up with golden beret and black sunglasses. In addition to that he hold a gun as well. His look is ready to entertain people on the signal of F-7 Markaz.

Golden Man of Islamabad got an NOC from Capital Police

He gets a lot of appreciation for his talent and skits at the start. People use to stop and ask for pictures and videos. Moreover, he even gets invitations to attend events and functions. But after some time he gets brawled by some local goons and later the general public. At the police office various applications were submitted in order to stop him. He said in his defense that if he is not hurting anyone, why anyone has any problem with him.

After many arguments and social media interference. Islamabad police take this matter seriously. They examined each and every aspect of this matter. After that he gets a NOC from police, he can entertain people without any intervention from police or general public.

Youngest of seven siblings, Muhammad Ahsan is full of plans to support his family. He shows his unique art to earn his livelihood. He aims to join Pakistan Army because his father was a retired navy officer. Pakistan has so much potential in its youth, if they have been given enough opportunities, they can do wonders.