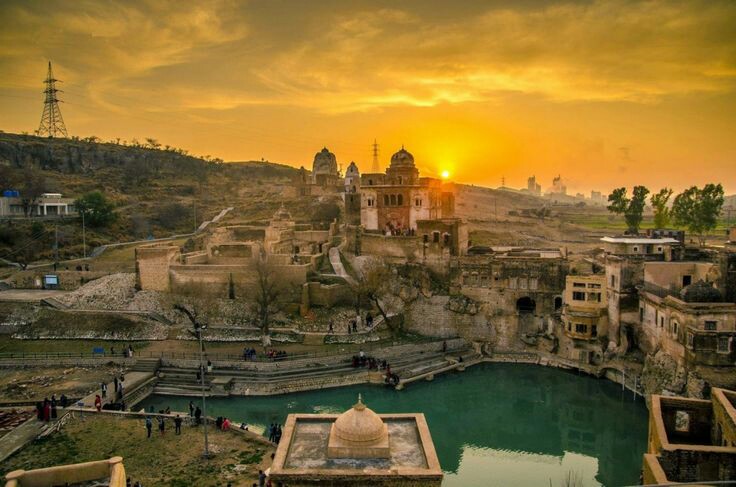 Once being a place for knowledge, wisdom, and governance. Katas Raj Temples became a forgetful historic landscape in Chakwal, Pakistan. However, The government is taking steps to turn this place into a museum and a significant site for tourists.

CHAKWAL, PAKISTAN: If you take a turn on Chua Saiyyadan Shah interchange from M2 Motorway, after 25 kilometers, an amazing set of the building will arrive. That historic set of buildings is known as Shri Katas Raj Temples. It resides in the district of Chakwal, Pakistan. This place has a unique yet complex style of construction that attracts tourists all over the world. It has different sections related to different kinds of gods in Hinduism.

Katasha is a Sanskrit word that has a base for Katas Raj. It means “teary eyes”. According to Hindu Mythology, after the loss of his beloved wife “Sati”, Shiv could not hold his tears and cried his heart out. Two tears fell on the world, which created large ponds in the area. One is in Katas Raj and the other one is in Pushkar, India. Moreover, Both ponds are considered sacred to Hindus and they believe that one bath can wash all the sins of their lives. Water is so clear and beautiful that it catches the attention of tourists instantly.

Katas Raj is undoubtedly a civil marvel of its time. It contains the history of around 6000 years in it. It is an assumption that these temples established in the reign of Ram, the sacred lord of Hindus. Other than that, this place is significant because Pandwas spent their exile period in this region as well. Whereas, in Mahabharat when Pandwas faced a defeat from Arjun they have to hide in a secure space, this location helps them at that time. Along with that the famous riddle game and get their lives back. They have 12 temples in order to give tribute to their 12 years exile.

Lord Krishna placed the Shivling himself in one of the establishments. That shivling is about 5000 years old according to historians and believers. Temple of Shiv is well ornate and is still functional. Hindu families came from near villages and India to give tributes to their God.

After the 1965 war, Hindu pilgrims were forbidden to visit these temples. However, after the establishment of the Gurdwara of Guru Nanak Singh, he made enough efforts to open this place for pilgrims. He spent his Vaisakhi celebrations at temples. That’s why he holds a special place in Hindus as well.

Indian prime minister Laal Krishna Advani visited this place in 2005. After that, the process of renovation started. Moreover, the pace of work increased in 2017. After the peace treaty, lots of Hindu delegations visited this place from time to time. Pakistan welcomes them with an open heart. They perform their rituals and place their gods in temples accordingly. Recently a delegation arrived and put a statue of Hanuman in mandir on March 6th, 2022. The statue of Ganesh is also expected to arrive in November 2022 as well.

Katas Raj Temples are one of the prominent historic places in Pakistan. Earlier it was neglected by authorities. But now the work of restoration is quite fast and effective. Moreover, they are planning to make this place a museum and religious location for pilgrims. It will attract more tourists from around the world. They are painting all the building new and trying to restore old pictures as they were. There is no entry fee as well as a free guide service. food and water is not available. Authorities are working on increasing facilities for tourists. It will take time and lots of money. But it will definitely deliver a message of peace in these chaotic times.