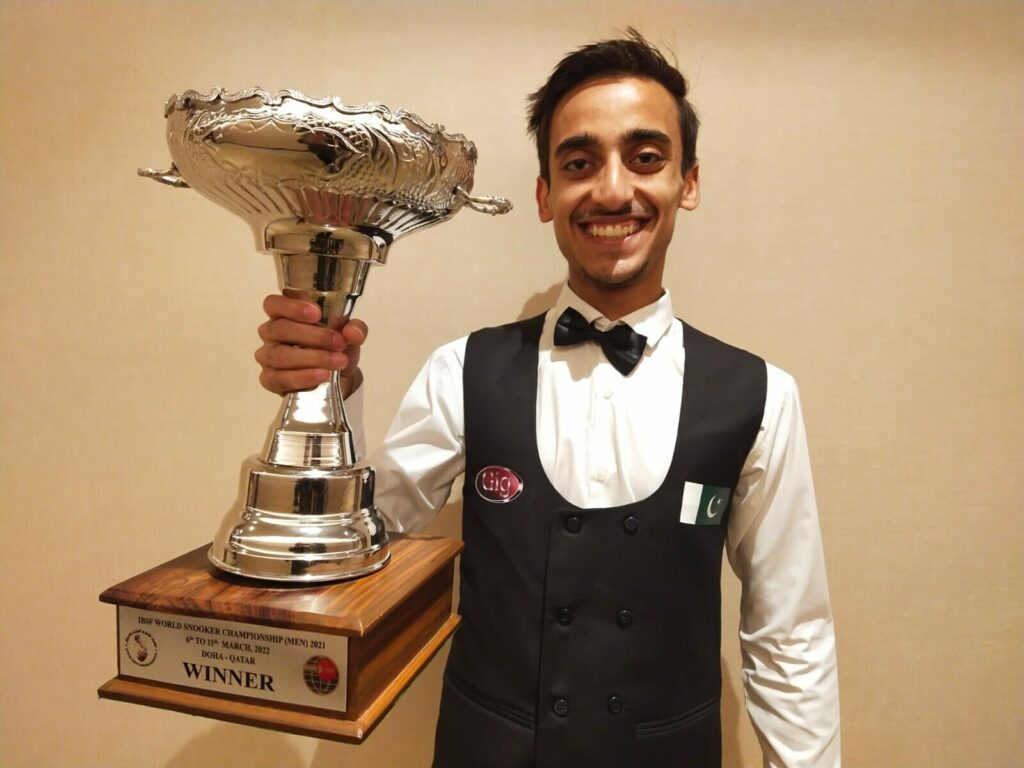 16 Years old Ahsan Ramzan defeated Iranian Amir Sarkosh in the final by a score of 6-5 after beating defending champion Asif in Semis and becoming the youngest champion ever in the IBSF world snooker championship.

Ahsan Ramzan, 16, a youthful snooker player from Pakistan has beaten Amir Sarkosh of Iran. He wins the International Billiards and Snooker Federation (IBSF) World Snooker Championship. The capable cueist has made the country pleased by bringing home the big showdown at such a youthful age.

In a nerve-wracking final held in Doha, Ramzan was cultivated 27th in the competition. He defeated the more talented Amir Sarkosh of Iran by a set score of 6-5. He has lost his parents at a very young age. Snooker attracts him which he always wants to play and today he is the Champion of champions.

Ahsan belongs to Lahore and had been playing snooker since 2017 on the junior level when he was not even 10-years-old. He is playing the IBSF World Championship in his international debut.

At one point in the game, Amir Sarkosh was leading by 3-5. He needed only one frame to win to become champion. However, Ahsan Ramzan did not crumble. He let his nerves take the burden of that pressure. His determination and composure were in so control that in his last 3 frames his hands didn’t crumble for a moment.

Decisiveness, serenity, and hold-on nerves took him back into the game. He is the youngest to win this huge title of his life. Pakistan has won it 4 times now. Although Former champion Muhammad Asif also played in the tournament and got lost by Ahsan in the semis, he has won this title twice. Muhammad Yousaf won this title once and now Ahsan Ramzan has won it for Pakistan.

Muhammad Hafeez, former Captain of Pakistan cricket and right-handed batsman also congratulates Ahsan Ramzan through his tweet. He gloated and said Ahsan has made the whole nation proud.

3 Pakistanis have got positions in this tournament. Ahsan Ramzan has won this. On the other hand, Former champions, Muhammad Asif, and Muhammad Yousaf, both got 3rd position. Iranian Player Amir Sarkosh finished on 2nd. However, it’s not that easy for Ahsan but his calmness, talent, and hard work took him to lift the title.

Ahsan was placed in Group C with Kadian, Sri Lanka’s Al Fahim Kamaldeen, and Russia’s Kirill Zhizduk. Whereas, he defeated all of them. On the other hand, he had to face his senior, Veteran Mohammad Asif. He was beaten in the semi-finals by Ahsan Ramzan. The youngster separated in tears in the wake of overcoming his senior, as Mohammad Asif embraced him out of affection and regard.

Ahsan’s father died 3 years ago. He lost his mother when he was 4 years old. However, at that point in time, Ahsan didn’t even think of this achievement. Even he got dropped out of school in class 8. At this point, Ahsan decided to pursue his career in professional snooker.

Ahsan made his nation proud. People around the globe and mostly in Pakistan will surely acknowledge the achievement of Ahsan. People of his country are hoping that he will keep breaking the limits. Everyone is hoping that this new chapter of the life of this youngster leads him to new heights of success.