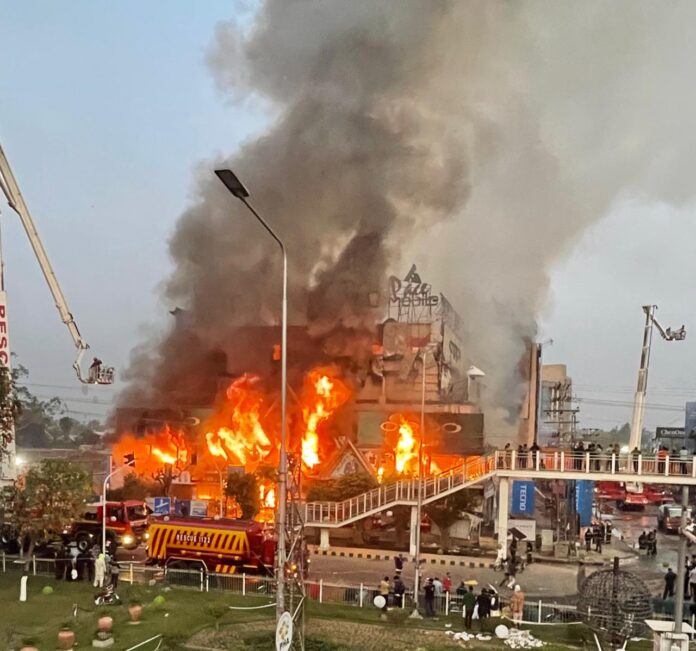 Fire at a shopping mall in Lahore’s Gulberg area was partially contained after six hours, and a cooling process is now underway. No injuries were reported till now.

Last night, a fire engulfed the Pace shopping plaza Lahore at 1 a.m. Flames spread quickly, destroying many stores in the mall. Firefighters used more than 25 vehicles to extinguish that. After 6 hours of frantic action, the firefighters partially controlled the fire. WASA vehicles were also used to douse leaping flames. Approximately 60 rescue officials participated in the operation. At this point, no one has been injured, but the shop valuables worth thousands of rupees have been destroyed.

Umar Sher Chattah, the Deputy Commissioner of Lahore, tweeted that the fire is now under control. He wrote: A fire has been put out at a private shopping mall i.e. Pace Lahore. The firefighters from Rescue 1122 did a great job. They risked their lives to put out the fire. I constantly monitored the firefighting process.”

The cooling process of the plaza is being carried out by rescue officials. Usman Buzdar, the Punjab chief minister, has ordered an inquiry into the incident.  Fire officials rated the fire as A-grade and ordered an investigation to determine what caused it.  Security guards at the Pace arrested by the poilce further investigation. More than 400 shops and several counters are located in the plaza, the DC said.

There have been no reports of casualties or spread to other compounds. There is no indication as to what caused the fire or when it started.

Road blocks and localized transport disruptions are likely to continue through at least March 14’s early afternoon. There will likely be lingering disruptions after emergency responders extinguish the fire, as investigators examine the incident.

Until authorities give the all-clear, stay away from the area. Find alternative routes around the incident site. It is recommended that travelers delay their arrival in the affected area until the early afternoon of March 14. When smoke is heavy, you should consider staying indoors, especially if you suffer from conditions that make you more susceptible to respiratory illness. If your eyes become irritated, flush them with lots of clean water.