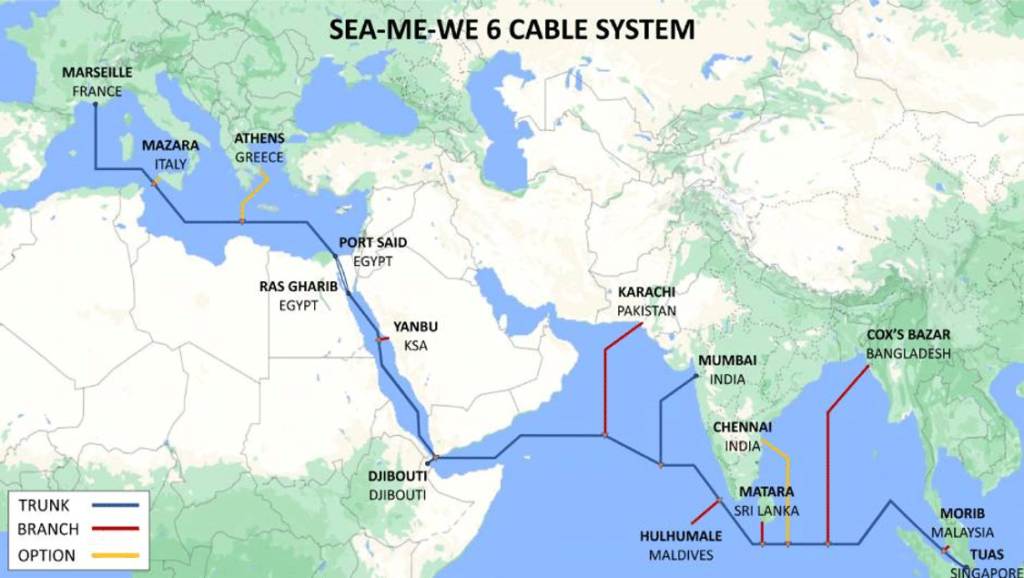 In Pakistan, Trans World Associates has announced joining a consortium that will manage and operate the SEA-ME-WE6 new submarine cable. The SEA-ME-WE 6 cable will be live and ready for service by Q1 2025, according to details.

Southeast Asia-Middle East-Western Europe 6 (SEA-ME-WE 6) anew submarine cable is 19,200 kms long. It connects Pakistan with several countries between Singapore and France. With SEA-ME-WE 6, the latency between Southeast Asia, the Middle East, and Western Europe will be among the lowest available. This will be the equivalent of transferring 40,000 high-definition videos each second.

“As a result, Transworld is well-positioned to maintain its position as the preferred operator in the post-5G era, thanks to SEA-ME-WE 6 and Transworld’s 100 percent owned private cable TW1.”

Transworld is well-positioned to maintain its position as a preferred operator in the post-5G era. Thanks to SEA-ME-WE 6 and Transworld’s 100 percent owned private cable TW1.

By adding flexibility to the network, the consortium members can increase capacity quickly. This will prevent traffic from failing, and also reduce network ownership costs.

There are more fiber pairs and a greater capacity in SEA-ME-WE 6 when compared to earlier SEA-ME-WE cables.

Furthermore, SEA-ME-WE 6 adds diversity and resilience to the high-traffic-density route between Asia and Europe thanks to trans-new Egypt’s geo-diversified crossings and landing places, benefiting each consortium partner.

Due to increased flexibility, consortium’s service providers will be able to scale capacity quickly, safeguard traffic, and lower the total cost of network ownership.