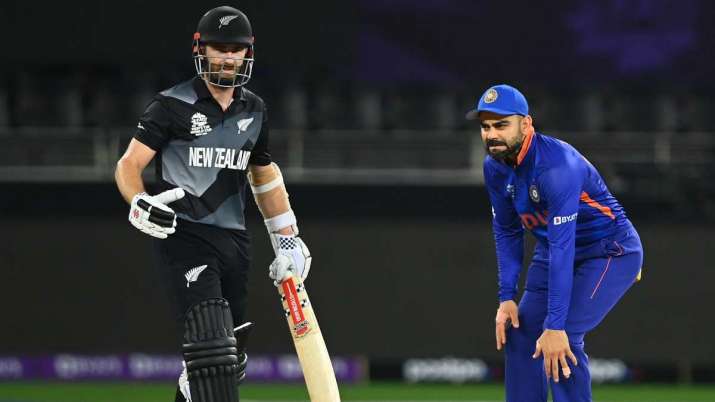 The Black Caps in its group stage match with India, had an easy win by 8 wickets. With this loss, India’s chances of getting into the semi final’s depends upon a few narrow possibilities

This loss has left the Indian team almost unable to enter into the semi finals of the tournament. For India to be in the semi finals, a long list of possibilities have to happen.

Details of India vs New Zealand

The match started off with New Zealand winning the toss and choosing to field. New Zealand’s decision to field, put up pressure on Indian batsmen. The pitch conditions being more favorable towards balling, made it more difficuilt.

The Indian batting started with openers Rahul and Kishan coming in to bat. The partnership managed to score only 12 runs in the first 3 over, before Kishan went off. Next came in Rohit Sharma and the brought up India’s hopes by scoring quick runs. Kohli then came in the 6th over after Rahul was caught out. Rohit Sharma soon got caught out and Indian wickets kept dropping after it. India managed to gave a small target of only 111 runs which was easy for the blackcaps to chase.

Guptill and Mitchells opened for New Zealand, the partnership performed well and made 24 runs in around 4 overs. This partnership however ended after Martin Guptill was caught out in the fourth over. Next came in Williamson and together with Mitchells, completed most of the target.

In the 13 over, New Zealand needed 15 runs with 8 overs at hand. With Williamson and Conway hitting consistent boundaries alongside singles and doubles, the target was easily achieved in the 15th over. This brought in the second victory for New Zealand and was a bounce back for them after losing in the previous match against Pakistan.

Possibilities of India getting into the semi final

There are two possibilities for India to get to the semi final stages of the World T20. Both are as listed below.